by YossiRachelson in Application Delivery Management

(This post was written by Dror Saaroni,  LeanFT R&D Manager)

Docker is a software container platform that simplifies the creation, management and deployment of applications by utilizing containers. Using containers, it is easier to package the application with all its libraries and dependencies and run it the same manner regardless of where it is deployed.

In LeanFT 14.01, we provide an integration between LeanFT and Docker. Specifically, we are providing our customers with a number of Docker images that they can use in order to execute their tests in a Docker environment. We want to make your functional testing as easy—and effective—as possible; adding this container integration allows us to do this.

In this blog, we will cover the benefits for using LeanFT inside a Docker container, the different modes for executing the LeanFT containers and we will drill down a bit into the implementation details.

There are a few questions you may be asking yourself: Why should I use Docker to execute my tests? What are the benefits that I can gain if I add Docker to the game?

There are couple of reasons why you would decide to use LeanFT’s Docker integration:

From LeanFT 14.01, you can use LeanFT with Docker and enjoy all the benefits listed above. The LeanFT images contain everything needed in order to easily execute your LeanFT tests.

In the LeanFT- Docker integration, we provide three Docker images that you can run in order to execute your tests. We provide the leanft, leanft-chrome and leanft-firefox images. Later on, we will see how to run these images and create container out of them.

There are two core modes that you can use the LeanFT – Docker Integration: as a standalone or as an execution box.

In the standalone mode, the LeanFT container will be started and will launch the LeanFT engine. Once the engine is launched, it will wait for commands. The user will need to execute his test on his machine and make sure the SDK is configured to run against the Docker container. When the test is run by the user, all the commands will be executed inside the Docker container. This mode is exactly like working against a remote machine. In this mode, the user is responsible for running the Docker container and stopping it when it is no longer needed. This mode eliminates the need to install the LeanFT engine on the client machine and the execution does not interfere with the client’s environment.

So now that we know what the different modes are, let’s drill down to how we can use the LeanFT container.

The command below should be run from the command line in order to execute the LeanFT container in a standalone mode. This mode will launch the LeanFT engine and will wait for tests to connect to it.

Let’s go over the command and explain each element.

docker run – this is docker CLI which runs a container

-it – executes the container in the foreground

leanft-chrome   - the LeanFT image. This image contains the LeanFT and the chrome browser

The below commands should be run from the command line in order to execute the LeanFT container in an execution box mode. This mode will launch the LeanFT engine and will execute the tests. Once the test is done, the container will finish as well.

The LeanFT Images which are based on Linux containers support executing LeanFT JavaScript based tests and Java based Tests. We will now see two examples of how to execute a Mocha test and a JUnit test.

The command line will execute a LeanFT JavaScript based test.

In this case, we don’t need to map the LeanFT engine port (5095) as everything is executed inside the container. The only port that we exposed is the 5900 in case we want to connect to the container using a VNC client.

-v <full path on the host’s machine to JavaScript project>:/tests - we map the host’s tests to the /tests directory inside the container

Plain English: we tell the Docker to execute a new container based on the leanft-chrome. We are mapping the local host path to the /tests directory and tells the container to start from this directory.
Once the container starts, it will look for a package.json file in the directory, and if it exists, the container will execute “npm test”. 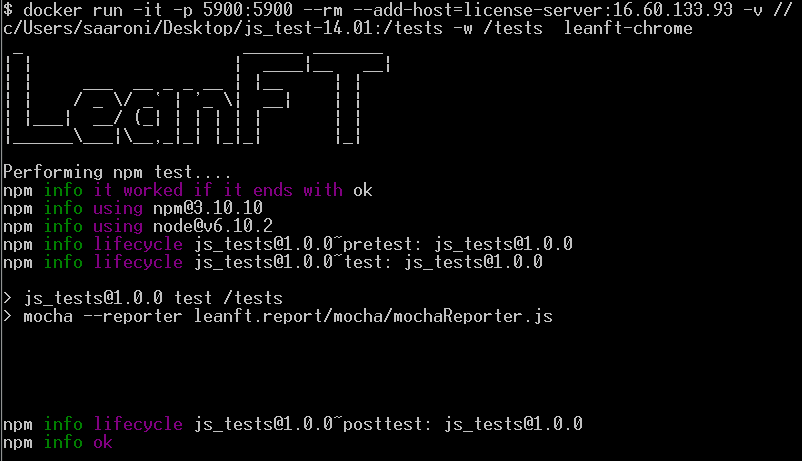 The command line below will execute a LeanFT Junit-based test in an execution box mode.

-v < full path on the host’s machine to java jars>:/tests - we map the host’s tests to the /tests directory inside the container

-w /tests - Indicates that the working directory on the container will be /tests (this is the directory that we mapped our tests ).

-e RUN_MODE=junit - We indicate that this is a JUnit test

Plain English: We tell the Docker to execute a new container based on the leanft-chrome image. We map the local host path to the /tests directory and tell the container to start from this directory.
Once the container starts, as there is a RUN_CMD environment variable indicating this is a JUnit test, it will use RUN_CMD in order to execute the tests that are in the “com.company.LeanFtTest” class.

Both commands mentioned above will execute the test inside the container. Once the tests finish, the report will be generated in the same directory as it was executed from (i.e. /tests). Because the directory is mapped, you will be able to access it from the host as well. So even though the test was executed inside the container, the test itself and the generated results are located on the host machine and are easily accessible.

As part of the LeanFT-Docker integration we provide three Docker images: leanft, leanft-chrome and leanft-firefox.

The leanft image is the basic image which contains the engine and the capabilities to execute LeanFT’s tests.

In order to get the images you can use the command:

In this blog we reviewed the new LeanFT – Docker integration, the different execution modes and their benefits, the different images, how to create containers from these images and some actual commands.

Docker provides many capabilities and can be executed in different modes, you can take LeanFT images and use them based on your experience and your development processes.

UFT Pro (LeanFT) is a powerful test automation solution that was built specifically for continuous testing and continuous integration. It enables advanced automation engineers and dev-testers in agile teams to leverage the standard development IDEs for test automation.

LeanFT provides a comprehensive automation SDK (available for Java, C# and JavaScript) that can be used to automate applications of all the common technologies (desktop, web and mobile). It provides plugins for Visual Studio, Eclipse, and IntelliJ, which contains powerful tools like the Object Identification Center, Application models, and much more.

You can find more information about LeanFT, in the LeanFT Help Center.