by hilale in Application Delivery Management

In my previous article, I explained the principles of REST and provided basic examples for working with the PC REST API.

In this article, I will concentrate on the create and update performance test REST calls. Due to the many possible configurations, the test entity XML supplied in the body of these calls can look quite formidable and confusing at first. I will try to make it clearer.

The syntax of a test creation REST call is as follows:

The test configuration should be passed in the request body as test entity XML.

Hint: As a first step in acquaintance with the structure of test entity XML, perform GET of the load test created manually and inspect the response. The test entity in the body of the response can be used as a basis for updating the test or creating a new one.

As you can see in the documentation, there are the following available elements: 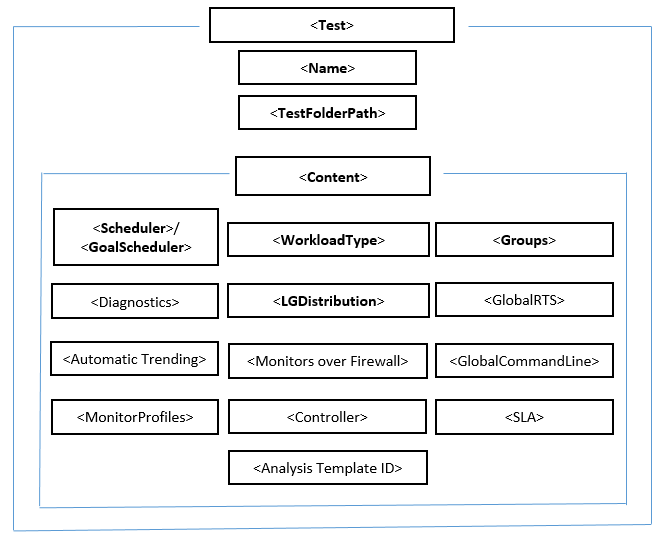 I will just concentrate on the mandatory parts (marked in bold in the image above).

This is a simplified example of the test entity XML:

<Name> and <TestFolderPath> are self-explanatory elements.

You are familiar with the workload types from the Performance Center user interface when creating a new test: 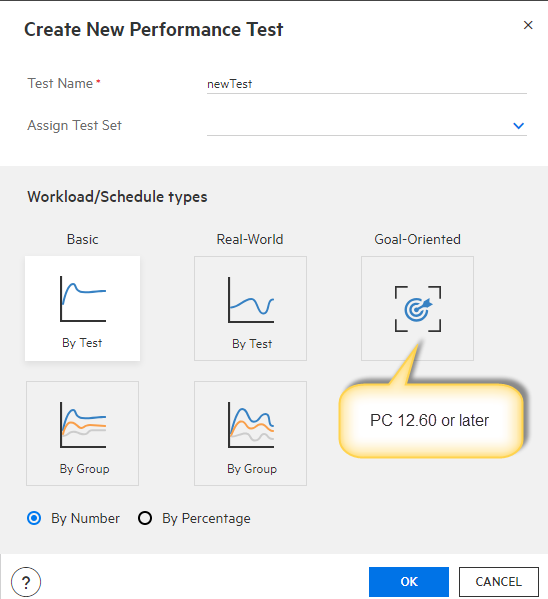 There are three workload types: “Basic,” “Real-World,” and “Goal-Oriented.” “Basic” and “Real-World” types contain two subtypes: “By Test” and “By Group.”

The following diagram shows all the valid sub-element configurations inside the element:

Examples of the different workload types:

There are two types of load generator distributions: assign “all to each group” or “manual” distribution.

If you use the assign “all to each group” type, you need to enter the number of load generators.

For “manual” distribution, you must add the <Groups> element (described below).

Example of “assign all to each group” distribution:

The <Groups> element contains one or multiple <Group> sub-elements, in which all the group-related data is contained.

If type is set to “manual,” the also includes the list of hosts, with a host for each host in the group:

Example 1
An example of a section with two elements, each containing a section. The first element also contains an section:

Example 2
An example of a element containing a element:

You use the scheduler to create a schedule that distributes load in a performance test in a controlled manner. The scheduler displays the actions that correspond to the selected workload type.

For a “Basic” or “Real-World” workload type, you use the <Scheduler> type; this is a Global Scheduler. <Scheduler> can appear as a separate element, or under Groups/Group/Scheduler.

For a “Goal-Oriented” workload type, you use the <GoalScheduler> type (introduced in PC 12.60). When using a goal-oriented scheduler, Performance Center automatically builds a schedule for you based on the goal you set for your test to achieve. 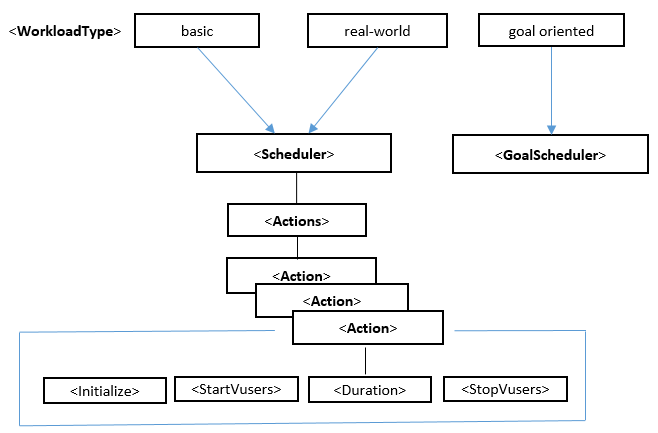 An example of a Goal Oriented which tests whether the application can run a specified number of Vusers simultaneously:

An example of a global scheduler is provided below:

Now that you are familiar with the main elements, I will provide examples of complete test entity XMLs. You can use them as a basis for developing your own REST API calls.

Example 1
Create a “Real-World (by test)” test that starts and stops Vusers simultaneously.

Example 2
Create a “Real-World (by group)” test that starts and stops Vusers simultaneously.

Example 3
Create a “Goal-Oriented” test with goal-type: Transactions Per Second.

The syntax of a test update REST call is as follows:

An XML describing the data to be updated in the test should be passed in the request body as in test entity XML.

Example of PUT request which updates the test

This blog post provides simplified explanations and examples for creating and updating performance test REST calls. I hope you find it useful when working with PC REST APIs.