In the previous posts of this series, I covered the process of preparing your script for performance testing and explained how you can run the same script on multiple devices. In this post, I will talk about how to configure transactions in TCNM.

In performance testing, transactions are used to measure the response time of an action or a series of actions. A meaningful response time should include the time the App spends responding to the action and displaying the UI where you can do your next action.

In TruClient, for each step, you can set an End Event, which defines the point at which the step ends and subsequent steps are allowed to start running. In TruClient – Native Mobile, there are 2 typical end events you can set.

In order to get the meaningful response time, you need to set the End Event to Object Exists, otherwise, the transaction time would be very short, almost as 0s.

In the example below, suppose you want to measure the response time of a search action. It defines a transaction which includes one Tap step, which taps on the Search button to start the search action.

If you set the End Event of this step to Action Completed, the transaction time would be very short.

The correct way is to set the End Event to Object Exists and specify the correct object. 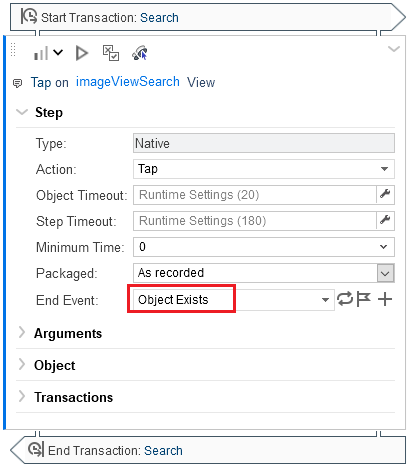 Another thing you need to pay attention is that in order to get the correct transaction time, you need to use the packaged version of the application. This is explained in UFTM help.

This post explained how to configure transactions in TruClient – Native Mobile.