Selenium and LeanFT: Easily integrating LeanFT into your Selenium-based projects

LeanFT Functional Testing (LeanFT), is a new functional test automation solution, targeted to advanced automation engineers and dev-testers in agile teams. LeanFT provides comprehensive SDKs for both .NET and Java, as well as plugins for these IDEs, which include several powerful tools like the Object Identification Center and Application Models. LeanFT supports automating applications for a wide range of technologies including Web, Mobile, .NET and Java applications.

Using Selenium to automate your applications but would like to start using LeanFT? don’t worry!

The blog covers the following scenarios:

If you already have tests in Selenium, you can continue using them, add new tests in LeanFT, and even combine LeanFT capabilities in your existing Selenium tests. And then over time, you can re-write your Selenium tests to LeanFT tests to improve your continuous testing process.

For the sake of this example, we will create a test using Java in the Eclipse IDE. Similar steps can be done using C# and the Visual Studio IDE.

Install LeanFT with the Eclipse plug-in.
Don’t forget to specify the location of your Eclipse.

In the following Selenium test, we launch Chrome, navigate to Wikipedia, search for ‘Star Wars’ and then verify the release date of the new Star Wars: The Force Awakens film.

a. Start Eclipse and create a new project. Call it LeanFTSeleniumSideBySide.

b. Add a reference to the Selenium JAR to your project.

c.  Add a new JUnitTestCase in your src directory.  Call your package mytests and call the class SeleniumTest.

d. Enter the code shown below in the SeleniumTest class.

e. To run the test, right click on the source file (SeleniumTest.java) in the package explorer and select Run As->JUnit Test. 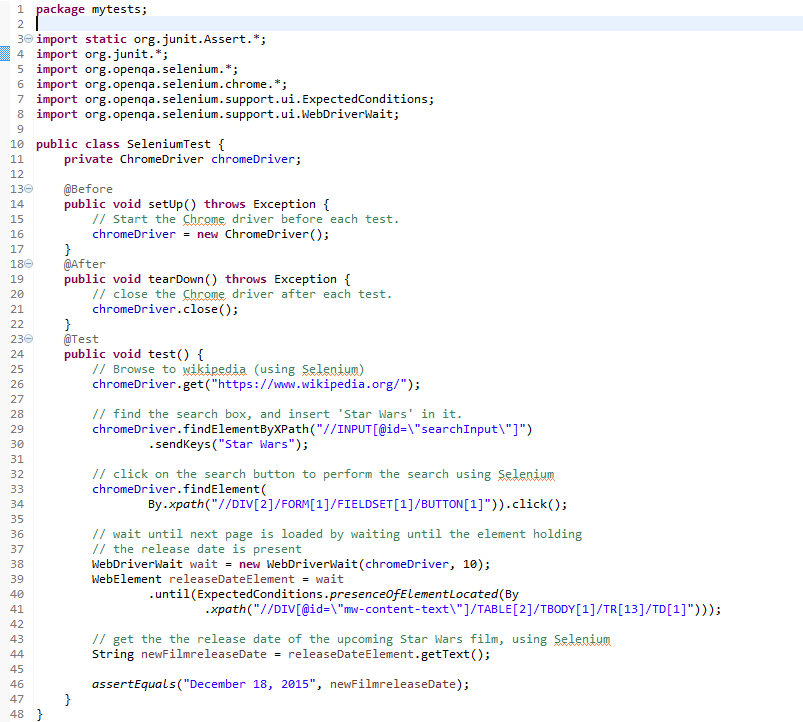 2. Add a LeanFT test to the project

The next step is to add a LeanFT test to the existing Selenium project.

Give the test case the name: LeanFtTest and click Finish.

3. Add the LeanFT test content and then run both tests at once

Now we’ll add content to the LeanFT test case.  This test is similar to the Selenium test we created above, only this time we verify the name of the movie director instead of the movie release date. 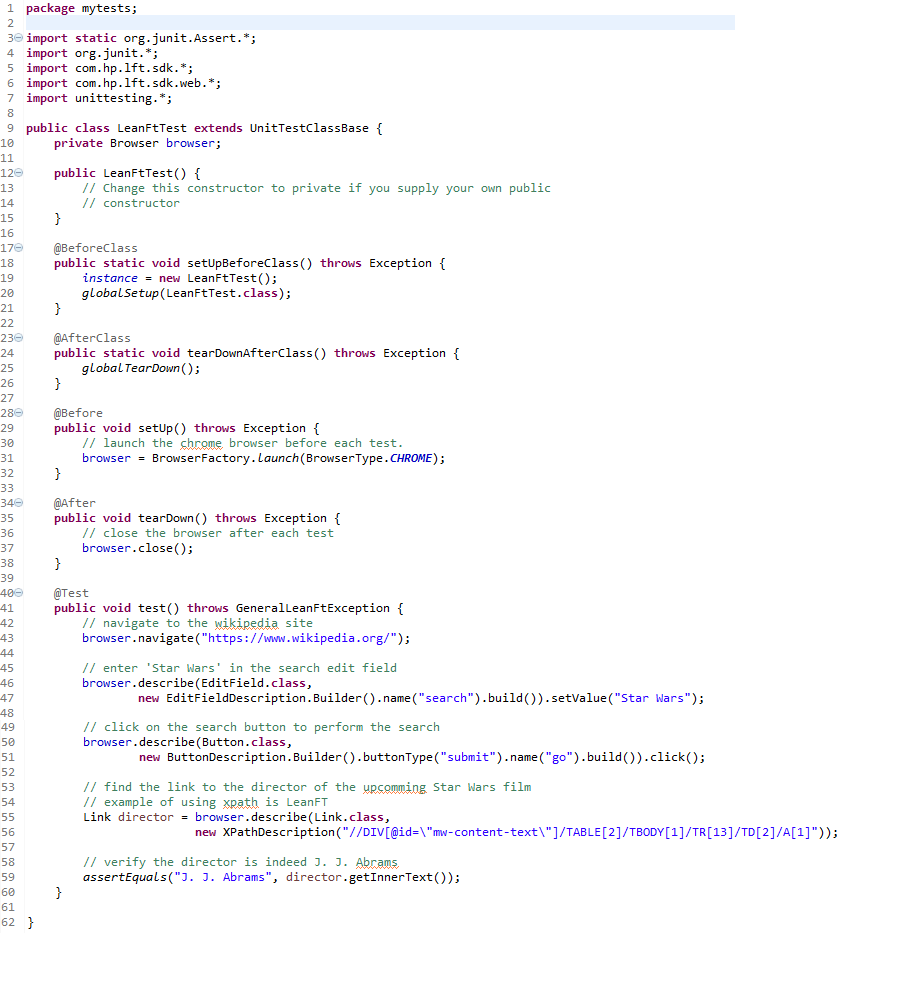 In this section, we create a single test that contains both Selenium and LeanFT steps. This test is a combination of the two tests we wrote in the section above.

From this point on we get all the capabilities of both LeanFT and Selenium on the same browser instance. 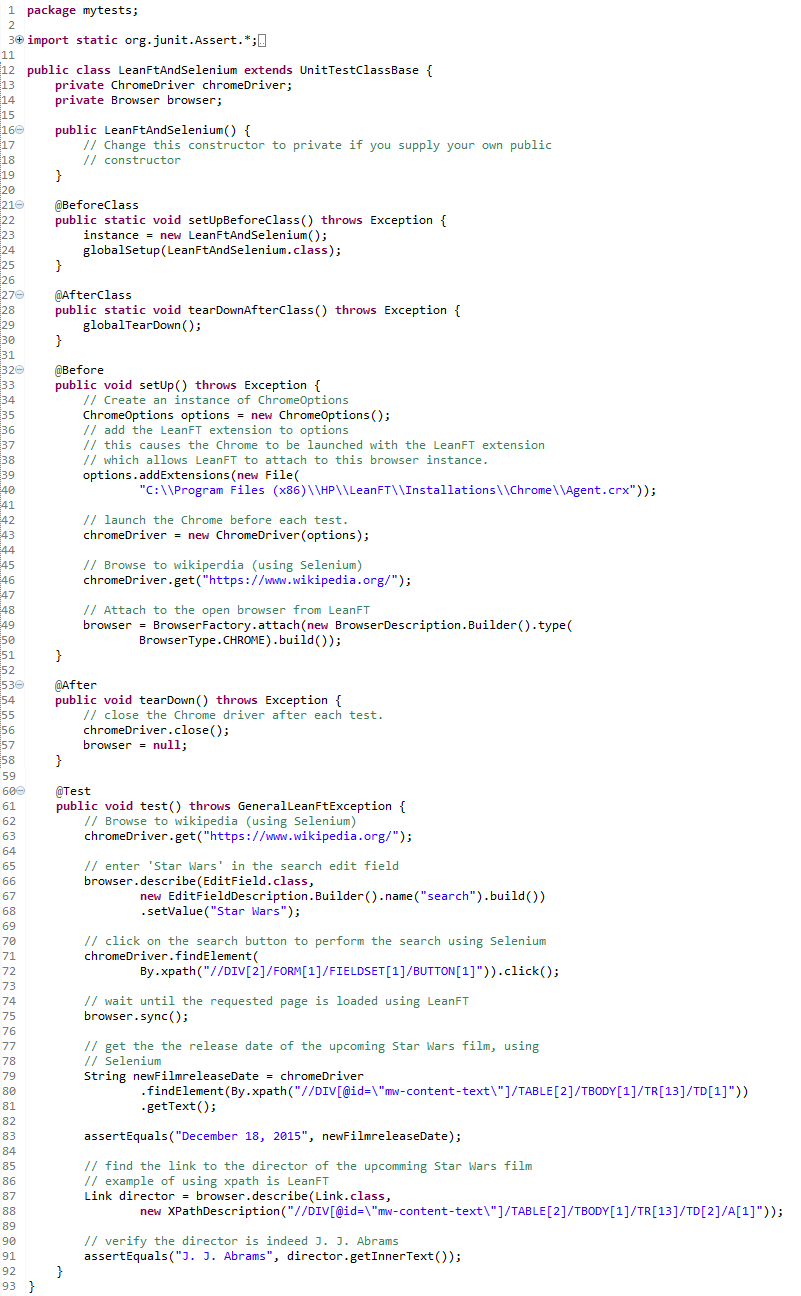 A note on the Test Report:

The LeanFT Reporter class also exposes an API that you can leverage to report the Selenium steps as well, and therefore have a single, complete report for the test.

This blog post shows how you can update your existing Selenium test projects to include LeanFT tests, and even combine both LeanFT and Selenium in a single test.

Thus, a project of Selenium tests can be migrated to LeanFT tests gradually, test-by-test, while your existing tests continue to function as usual.

If you would like to try LeanFT for yourself, take a look at the LeanFT Trial web site.

Thanks to Anton for providing this article!