A permanent workaround required for the Error which was observed while connecting to MFALM(32 bit) through Excel macros, after installing Microsoft 365(64 bit)
1
ALM and ALM synchronizer 15.5 in 64bits version !!
0
Idea ID: 2870125

Allow Reports to Group by Possible Categories Rather than Current Categories

Right now when creating a report, if we want to group multiple status (e.g. collapse all defect statuses into "Open" and "Closed"), we can only make groups using statuses that current defects have. So when setting up reports for a new project, if there aren't defects yet, we can't create those status groups at all. Instead of forcing users to group by current statuses, can ALM instead allow us to group by possible statuses? Even if those statuses have to be defined manually when creating the reports. 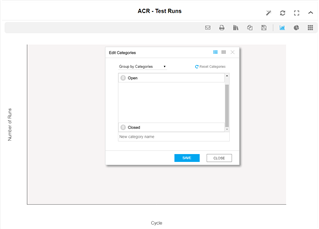