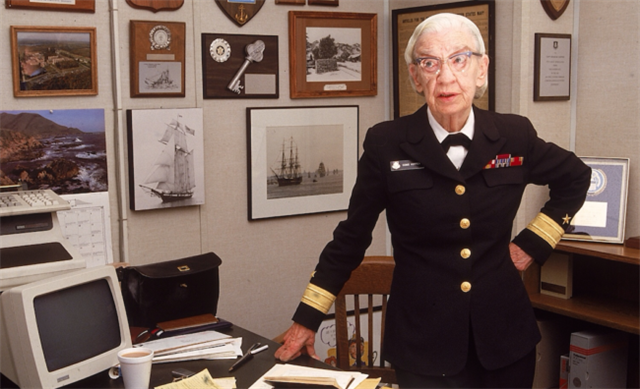 Admiral Grace Hopper’s accomplishments are more than impressive.  She was one of the first programmers of the Harvard Mark I computer, invented machine-independent programming languages, and coined the term “debugging”.  At age 28, she earned her Ph.D from Yale at a time when few women pursued advanced degrees in STEM fields.  10 years later, she convinced the US Navy to waive restrictions on age and weight, launching her Naval career culminating in being the oldest person to receive a promotion in the United States military when she was promoted to the rank of rear admiral at the age of 79.  She’s been awarded both the National Medal of Technology and Innovation in 1991 and the Presidential Medal of Freedom posthumously in 2016. She was instrumental in the creation of COBOL, the programming language that most large organizations rely on for their core IT systems.

It’s stunning what she achieved despite significant headwinds due to the gender bias common to her generation.  Her life and career have inspired generations of young women in STEM, me included.  Anyone of any gender or background can be inspired by Grace.  Her story teaches us the importance of perseverance, taking risks and being open to new opportunities.  But I have found personal inspiration from her life that goes a bit deeper.

How was Grace able to navigate the turbulent seas of bias around her?  Most people attribute her persistence and hard work.  I know that continuing to work hard, despite the obstacles was clearly a part of her success.  But I think there’s another part to it that we could all learn from.  She refused to hold the anchor, the weight of the stereotypes that tried to tie her down to a single, narrow role.

As I watched the video interviews of her, I was struck by how matter-of-fact she was.  She didn’t rage against the biases, she merely refused to accept them.  She never seemed to internalize other people’s definition of who she should be.  Rather, she simply and unemotionally focused on doing the task at hand.

My lesson is that perhaps the first way to fight all kinds of bias – gender, ethnicity, social class, educational background – is to not internalize it.  Don’t accept the anchor tying you to a narrowly defined role.  Only you get to define who you are, just as Grace defined who she was.

Although Grace Hopper is known as the Mother of COBOL, the idea originally belonged to Mary Hawes who recognized the need for a common business language for accounting.  Mary brought the idea to Grace who then helped champion the idea and was indeed fundamental in making COBOL become a reality.  Would COBOL exist if it hadn’t been for Grace Hopper putting her reputation behind it and rallying support for the first CODASYL meeting?  I’m not so sure.

Grace teaches us that good ideas can come from anywhere and no matter how successful you are, you should check your ego at the door.  Those of us with years of experience need to retain our curiosity, asking the people around us for their perspective.  There’s always something to learn.  But more than that, we need to make a conscious effort to lift those people up by championing their ideas in a way that continues to give them credit.

Open the Ocean to Anyone Willing to Sail

Grace’s FLOW-MATIC programming language was not only the first machine-independent programming language, but she insisted that it use real English words rather than the cryptic keywords favored by computer researchers.  She carried none of the “programming is only for the educated” bias that too many others then and today still believe.  Part of COBOL’s pervasiveness was because, like FLOW-MATIC, anyone fluent in English could understand what the program was doing.  In this way, Grace made programming more inclusive by making it simple and accessible.

But making code readable was only one way she opened the ocean of computers to anyone willing to sail.  She had a talent for explaining things in a way that anyone could understand.  She took the time to explain technology to anyone interested in learning, yet again lowering barriers and assuming that everyone has potential regardless of their background. Grace reminds us that it’s not on the listener to understand, it’s on the speaker to explain in a way that can be understood and that we should use that talent to spread our knowledge to anyone interested in learning.

Grace Hopper was an extraordinary woman and an inspiration to many people of all backgrounds.  She never seemed to look at herself with the same level of awe that we look at her.  I think it’s that simple, fact-based attitude that led to her success in overcoming bias and helping the people around her grow.  We could all be well served to follow her example.