In the 6.0 Visual COBOL/Enterprise Developer products, we have added additional tooling for working with Docker Images and Containers in the IDEs when using native COBOL projects. We understand that increasingly customers are looking to containerisation as a means to modernise their codebase. With this in mind, we want to help streamline the developer experience. In this post, we will cover what a developer can expect from the new support when working with native COBOL projects. This assumes some basic understanding of containerisation concepts. The Eclipse IDE product has also added containerisation support, but will not be covered in this post.

Before enabling the container support, the developer should ensure the corresponding Micro Focus base images have been built and are present on the system. There is a base image that will be used to build the developer's source code and another for running the built artifacts.

Once the base images are present, we can now enable the support in the IDE.

This will add a Dockerfile into the project and also provide a new debug launch profile called Project (Docker). Behind the scenes it also updates your project file to indicate the support is enabled. 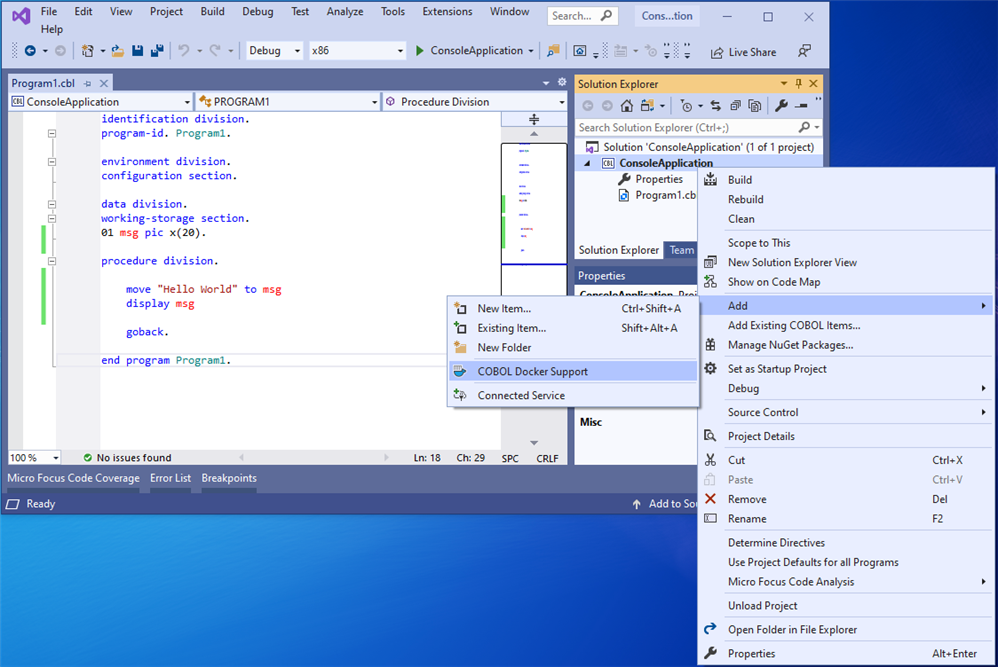 By default, when container support is added to a project, a Dockerfile is added. The Dockerfile is structured to support a quick develop and test cycle. When updating this DockerFile, the layer structure should be maintained in order to retain IDE support. The structure is as follows:

To build the Image for production use, it is possible to do it directly within the IDE or on the command line. Within the IDE, simply right click on the Dockerfile and click Build Image. This executes a docker build on the Dockerfile. This always does a full build of the image, whereas builds that are automatically triggered via debugging only include the base layer.

Launching and Debugging a Container

To support debugging COBOL code running inside a containerised environment, there are new debug launch profiles. These run in the same way as their non-Docker specific counterparts and provides Docker specific handling. The developer can configure these launch options in the Debug project properties page of their container enabled project. Once the developer has selected one of these profiles, it's a simple case of clicking the Start Debugging command. The IDE will build the image, start up a new container and debug the application.

Since debugging containers is a little different from debugging an application on your local machine, it's useful to have an outline of what happens when the IDE does a debug launch. The general steps are as follows:

These steps are only for a first-time launch. Subsequent launches will reuse the existing container where possible. If there are changes that require a rebuild of the container, then this will be automatically handled by the IDE (e.g. if the Dockerfile was updated). This means that any edits made to the sources can be quickly rebuilt locally and tested in the containerised environment. Since the output directory is volume mounted inside the container, there is no need to rebuild the image and relaunch the container.

If this mode of working is not suitable, it is possible to force the IDE to do a full build of the Dockerfile, rather than just the base layer. When the project configuration is set to Release, a full build of the Dockerfile will always be triggered. Coupled with the use of the Executable (Docker) debug launch profile, it is possible to handle more complex debug scenarios. To enable debugging when building for a Release configuration, the Compile for debugging setting must be enabled in the COBOL properties for the project. The developer should be careful to avoid committing this change to version control, since typically debugger artifacts are unwanted for release builds. Additionally, builds and debug start up will take longer, since a new image must be built and a container started for each debug session.

Hopefully this post explains how the new Docker support in the IDE for 6.0 works. In my next post I will cover some of the specifics for containerising an Enterprise Server project when using the Enterprise Developer product. Be sure to check out the documentation for additional info about the support.

Don't forget to join the Visual COBOL Launch Webinar on June 24 for more: 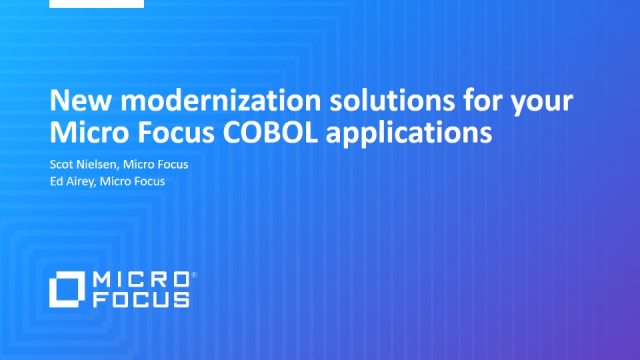