The 7.0 versions of Visual COBOL and Enterprise Developer have recently been released. More new features have been added to the Visual Studio and Eclipse IDEs, to help developers write, build and debug their code and diagnose problems.

This provides quick and simple edit, compile and debug support for COBOL programmers. More information on this in a separate blog.

Now let’s take a look at some of the new IDE features. I’ll start with the Visual Studio IDE, then move on to Eclipse.

COBOL Code Cleanup is a new feature in 7.0. This is part of the Code Style support – Code Style includes Formatting and Cleanup.

Formatting makes changes to whitespace only. The initial COBOL Formatting support was added in the 5.0 release, back in 2019, enhancements are ongoing. There are many configuration options available which allow developers to set indentation and alignment rules in COBOL programs to their preferred style or a style specified by their team or company.

Each item in the list shows a preview of the preference when selected: 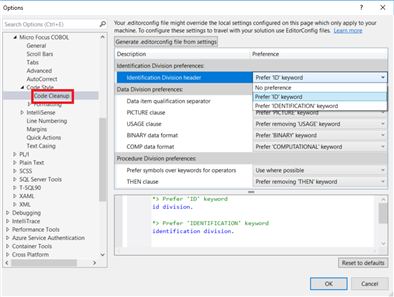 These preferences can be applied from the menu option Edit > Advanced > Format filename with Code Cleanup.

EditorConfig support for COBOL was introduced in 7.0. This feature allows users to share code style settings. The EditorConfig can be shared with a whole development team or organisation to help maintain consistent code styles.

To use an EditorConfig file you just add it to your project or code base.

The Data Flow Tree support was added in 5.0. In 7.0 an option has been added in Visual Studio to show the Data Flow results as a graph.

This feature allows the developer to select a data item in the COBOL editor, run “Show Data Flow” and see the incoming and outgoing paths of the data item, making it possible to see how changing a data item could affect the program. The developer is given an option to show forward or backward data flow.

Accessing Mainframe Resources from the IDE

Functionality has been added to Enterprise Developer for Visual Studio to provide quick access to developers to mainframe resources when developing and testing mainframe applications. The new features include views for CICS Resources and new integrated Spool and Catalog views.

The integration does not provide a complete copy of the ESCWA administrator product support. The user experience should be similar, but just developer functionality has been exposed.

There is support to view and edit PCT, FCT and PPTs for CICS-enabled Enterprise Servers directly from inside the IDE, which gives quick access to Enterprise Server without having to leave the IDE.

The views include navigation, filtering and search facilities. The ability to add, edit and remove resources. The new integrated Spool and Catalog views replace views that were accessed from the IDE. The Catalog View offers search and filtering options, the ability to add new entries and edit existing entries and delete datasets. PL/I integrated debugger support is a new addition to Enterprise Developer for Visual Studio in 7.0. This offers a great improvement to the user experience for PL/I developers, similar to the COBOL debug experience in Visual Studio. 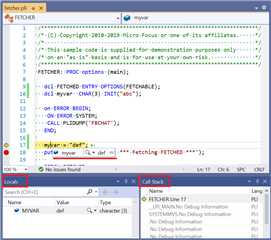 In 7.0 the version of Eclipse shipped and installed with Enterprise Developer and Visual COBOL has been updated to Eclipse 4.16 (2020-06).

Eclipse IDE support has been added to Visual COBOL for Eclipse on Ubuntu Linux and CentOS.

Support for COBOL Formatter Profiles has been added in 7.0, which allows developers to create, import and export profiles. This makes it possible for a team of developers to use a standard profile.

The initial COBOL Formatting support was added to Eclipse in the 5.0 release. There are many configuration options available in the Eclipse Preferences allowing developers to set indentation and alignment rules. 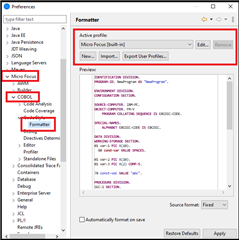 Some new enhancements have been added to improve usability when developing applications on remote machines with Eclipse including:

The client-side and server-side connection diagnosis reports have been enhanced to detect potential firewall problems, to help speed up diagnosing connection issues. This is on Red Hat 7.2+, CentOS 7.2+.

This new connection type uses the built-in SSH daemon on the remote machine, and reduces the configuration needed in the Visual COBOL Development Hub.

In 7.0 there is a 64 bit and Linux BMS compiler (previously the BMS compiler has been 32 bit Windows only). This means that developers on Linux will no longer have to copy the BMS files to the local Windows machine to compile and so there will no longer be a requirement to use SAMBA.

Functionality has been added to both IDEs to allow developers working alongside Enterprise Analyzer to do Application Wide Analysis.

Users who have access to an Enterprise Analyzer repository can view the repository from the IDE.

Developers can run “Get Direct References” from the new Analysis Server Explorer or from Solution Explorer (in VS) or Application or COBOL Explorer (in Eclipse), which allows them to see the dependencies of a file in the Enterprise Analyzer workspace.

Click on the image to learn more about the Micro Focus COBOL Visual Studio Code extension and view on the Visual Studio Marketplace.