by Planters in Application Modernization & Connectivity

Let’s face it right now, this pandemic has been bleak. It’s affected each and every one of us, it’s made us re-evaluate our lives and driven unprecedented acceleration in Digital Transformation. Not by choice, by necessity. I find myself overly excited at the thought of seeing some of the things promised in our post-Pandemic world. Regular readers of my blogposts will not be at all surprised to hear that the upcoming James Bond Movie ‘No Time To Die’ is something I am desperate to go and see in the cinema. Southampton FC winning the English Premier League is another major something I anticipate in the new-normal-post-vaccination world that awaits. In other news that will surprise no-one at all, there are rumours that my former employer IBM is about to announce the latest model in their legendary ZSeries server range as part of their steady and ongoing 2 year refreshment cycle.

James Bond and the ‘ZNext’ – Not Again?!

It’s true, (leaving the mighty Saints to one side for now) I have already blogged about these personal favourites. And yes, I concede it is all a bit silly. But who doesn’t need a smile in these COVID-19 times? The last time I blogged about this was a retrospective look at the shared history of 007 and the Z15. So, as part of my own bi-annual blog release cycle let me now take a look into my own crystal ball to anticipate what might be coming in their shared future. I am making (00)7 predictions about the things that I think will marry the two scheduled releases when they eventually happen, and why.

Making predictions is a notoriously risky pastime, especially in IT. So will they prove to be as incorrect as Thomas Watson’s 1943 gem ‘"I think there is a world market for maybe five computers’? I don’t think so, but let’s see a little bit further down the line shall we? I’ve hedged my bets as much as I can. Here goes:

001 You know the names; can we guess the numbers?

James Bond’s 007 number is legendary and ironically makes him the world’s best known secret agent. (Does that also make him the worst secret agent in the world?Possibly. But I don’t think so). Perhaps less well known is that he works for MI6 – that’s a fact. We don’t know yet that IBM’s ZNext Mainframe will be called Z16 but there’s an uncanny potential coincidence in my mind between these name/number tie-ups (even though one’s an ‘I’ and one’s a one but we’ve also been here before with PL/I right?)

This will be Daniel Craig’s last outing as Bond on the big screen. It certainly won’t be an IBM Mainframe curtain call but neither will it be Bond’s. Rumours are rife already about the actors tipped to take the reigns - who’s your money on? When you have as much unbridled success as these two institutions, when you’ve seen off as many competitors, when you’ve earned your place in the world through guts & glory, you’ve more than earned the right to keep going. The core DNA of both will make them thrive for years to come; it’s something Standish Group call ‘Endless Modernization’ and you can find out more on that here. Bond in this next movie is expected to be more politically correct and self-aware emotionally than any of his previous incarnations to suit today’s ‘woke’ market. Continual Transformation is a key to survival for everything and everyone these days, even its most deadly hit-man.

003 A changing global Security landscape will be a central theme:

In their shared history both the IBM Mainframe and James Bond have stared down and terminated their evolutionary adversaries with an almost clinical erudition. Even when they’ve appeared to be against the ropes, at times caught off-guard by a sudden change in attack or environment, both have rolled with the punches and emerged as clear winners. They’ve both become better at anticipating new threats too. To thrive tomorrow the ‘IBM ZNext’ server will doubtless arrive with a brand new array of bleeding-edge Cyber-Security features that set it apart from its detractors and increasingly sophisticated cyber-terrorists too - watch this space when it happens. Blofeld and Spectre are the staid Bond adversaries due to re-emerge in No Time To Die, alongside Rami Malek’s ‘Lyutsifer Safin’ character who apparently pushes all boundaries as a James Bond baddie. I cannot wait to see him inevitably tumble, but I also await him testing Bond to the limits with a new global security threat too.

Not everyone needs an enterprise class server that stands head and shoulders above the rest and never fails nor rests. Not everyone needs a world class Government-sponsored but ultimately ‘deniable’ assassin with them on their mission. But for those that do, you need to be sure you won’t be let down. James Bond is set to emerge from retirement in No Time To Die because he has a unique skill set enabling him to do what he does so well. Show me a better, more reliable, world beating Enterprise Server, I challenge you. Neither are priced as a commodity; who’d want to sign off an 007 expense claim? But when only the best will do and your very survival is at stake, it’s a price worth paying. The brand and reputation of both legends make both of these future outings so exciting, and for those who know both, there is no more valuable a thing in the calendar to look forward to.

005 Classy Chassis’ are a sure-fire certainty:

Since inception, the chassis of the IBM Mainframe has transformed from a veritable giant, needing its own room in some instances, to a slim down, sexy looking sleek server with unbridled power to suit today’s server room . The chassis’ enjoyed by James Bond are more automotive but have also embraced incredibly swift evolutionary change. Will the gas-guzzling Aston Martin DB5 of yore remain as part of the culture? Absolutely! The outrageous unconcealed weaponry featured on the Jaguar C-X75 driven by bejewelled henchman Zao in Die Another Day is possibly less likely to re-appear again, but I can honestly picture Bond behind the wheel of an electric car. The advancement of electric automotive technology is evolving on a trajectory as demanding as the Digital Transformation one driven by the demands of the innovative FIA Formula E racing calendar – no wonder Enterprise-centric technology giant Micro Focus have emerged in support of Team Jaguar this season. So an electric car might not be 007’s 1st choice of wheels but I can certainly see one or more appearing in the cast of the upcoming movie. 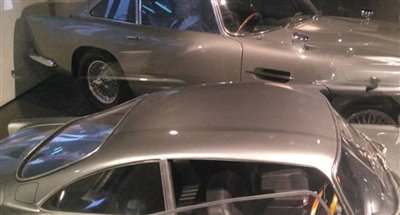 Bond is never without the very latest, most high powered, sometimes concealable weaponry and gadgets to see off his nemesis. You can bet your bottom dollar that IBM’s own Quartermasters are making sure their legend emerges from their secretive labs with the very latest in high tech gadgets, gizmos, feeds and speeds to set it apart in today’s world of Hybrid IT. I’m expecting exhilarating levels of speed, security, versatility, elasticity, and scale ‘on demand’ in ZNext that will be as exciting to Enterprise Techies as 007’s new gadgets are to his fans. And Clouds will feature in both releases too. James Bond will undoubtedly crash through a sky-based one in a plane or a wing suit or something. IBM, on the other hand, will no doubt go all out to prevent any Cloud-crashing-nonsense with their release.

007 Both launches will be major-league newsworthy

Not many things can launch these days with a global news fanfare. However both 007’s and IBM ZNext’s Premiers WILL certainly come with headlines and interest worldwide. No Time to Die is already a household name and is discussed as another victim to date of this horrific pandemic. Every single time IBM releases a mainframe it’s accompanied by unprecedented IT and Broadsheet Press. Both of my blog characters have correctly captured popular imagination and a cherished place in Global Culture. Long may that status continue.

Did I miss anything? Will I be correct? Find me on Twitter to tell me where you think I am right or wrong, and feel free to check in after both have been released to review my predictive powers.

[THIS BLOG WAS ORIGINALLY PUBLISHED ON MAINFRAMEDEBATE.COM]

Get Excited! Watch the 'No Time To Die' Trailer: