Last summer, I had socialized the idea with many of our customers, to slow down the patch update release cadence for 8.2. Although it was appreciated customers had the opportunity to take new changes every 6 months, the release cycle often felt like a foot race. As soon as you were done with an upgrade, you immediately had to plan for the next upgrade to take place. To help alleviate the burden of having to upgrade every 6 months, we developed patches to only include executable components and to deliver customizable components as part of a release rather than include them as part of the 8.2 patch update releases. We also began to deliver patches within a 9-12 month window to give customers more time to plan an upgrade and to slow down the urgency having to upgrade. Since we introduced this new patch update cadence, we have been hearing from many customers with positive feedback. Oddly enough, rather than see a dip in customer upgrades, we've seen customers upgrade to the current patch level almost immediately. More than 70% of our customers are on either patch update 5 or 6 which is amazing since the vast majority wanted us to slow down the patch update cadence. This likely has to do with only executable components making up a patch, thus greatly minimizing breaking changes and releasing a patch update every 9-12 months giving our customers ample time to plan an upgrade, but also drastically cutting down the amount of testing and effort to perform the upgrade.

Because of the new patch updates for 8.2, we consider 8.2 to be in a STABLE state. We will continue to release patch updates on an "as needed" basis as the number of fixes have been greatly decreasing with every patch release. We are now focusing our attention to release 8.3. Unlike, 8.2, the 8.3 release will be considered an "ACTIVE" release. Meaning, when we release 8.3 in the Spring of 2023, it will contain both executable and customizable components. There have been a number of enhancements customers have asked for over the last couple years. In the past, these would have been part of a patch update, thus introducing breaking changes, as well as the heavy burden and effort having to plan, test, and perform the upgrade every 6 months. Since the release of 8.2 Patch 5 (and now Patch 6), those changes that would introduce breaking changes, were pushed to 8.3.

We have enough changes that warrant a new ChangeMan ZMF release. In prior years, we'd look to "end support" for the prior release, in this case, 8.2. However, considering it's a very stable release and there are customers who aren't interested in new changes (8.3), we will continue to support 8.2 with patch updates for the foreseeable future. Currently, there is no end of support date for 8.2. Customers who wish to remain on the stable 8.2 release and receive patch updates, are able to do so.

8.3 will be an optional release and targeted toward customers who are interested in taking on new changes. As described above, 8.3 is considered an ACTIVE release and this has both executable and customizable components and thus, introduces breaking changes. We anticipate for the first two (2) or three (3) 8.3 patch updates, we will include both executable and customizable components. After which time, we will move into a STABLE release state for 8.3. It’s at this time we will make announcements we will “end support” (patch updates and hot fixes) for the 8.2 release.

Please note, the below diagram is not drawn to scale, but represents a proposed timeline for 8.2 planned patch updates. Patch Update 7 and 8 are merely placeholders and are not committed to a timeframe. The targeted timeframe for 8.3 to be GA (Generally Available) is Spring 2023. 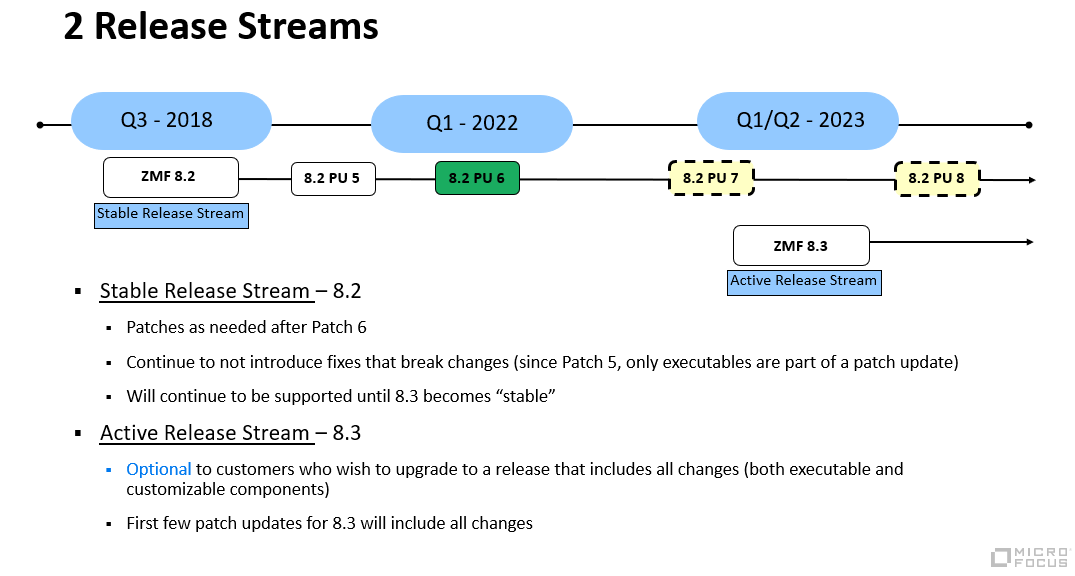 Please note, at this time there are no plans for an 8.4 release. However, our plan is to have one release STABLE while the latest release is ACTIVE. This implies we’ll have an 8.4 (ACTIVE) release when 8.3 becomes STABLE (and 8.2 is no longer supported for patch updates or hot fixes). If you have any questions or concerns, please let us know.