Now Is a Great Time to Migrate to Windows 10

by Gil Cattelain in Team Collaboration and Endpoint Management 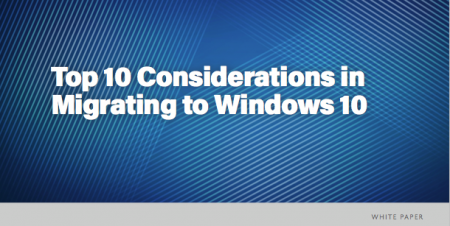 Back when Microsoft released Windows 10 last July, your business didn’t budge. Instead of migrating immediately to the new version, your company decided to continue using its existing software in an attempt to play it safe and avoid the inevitable bugs that were bound to arise.

You’re not the only one dragging your feet. At last year’s Microsoft Ignite 2015 conference, 71 percent of survey respondents indicated that their companies were planning on waiting at least six months to migrate to Windows 10; 49 percent said they would wait more than a year. This figure was even higher (80 percent) for large enterprises with 100,000 end users or more.

Now, we can anticipate that many more businesses will start to implement Windows 10 onto their machines, helping to fulfill Gartner’s prophecy that Windows 10 will be the most widely installed version of Windows. After all, reviews thus far have been overwhelmingly positive. PC Magazine gave it 4/5 stars with an editor’s rating of “excellent.” And just recently, Microsoft released the Build 14332 update, which contains information about numerous bug fixes. More on Windows 10 fixes can be found here.

As Gartner explains in its Predicts 2016 report, however, waiting too long can increase the cost and complexity of migration. So it’s better to be proactive and embrace the latest version of Windows on your own terms, before you are forced to do so.

Once you do make the decision to migrate your business machines to Windows 10, keep in mind that the process will not be as simple as it is for home PCs. As we described in a previous blog post, it can be a massive undertaking—particularly for companies with large numbers of end users.

It will pay dividends to invest in ZENworks Configuration Management, which can simplify and rapidly accelerate the Windows 10 migration process. ZENworks Configuration Management will perform automatic imaging tasks and pre-boot services. Another exciting feature (and there are many) is that it will also allow IT to manage multiple Windows desktop operating systems and versions, thus making it easier to control the mixed environment until migration is complete.

To learn more about how ZENworks can streamline your Windows 10 migration please download the following TechTarget White Paper "Top 10 Considerations in Migrating to Windows 10."