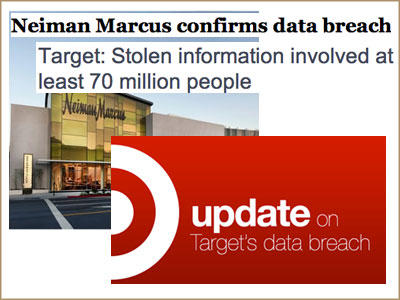 Unlike many tech issues, data breaches are not something we’re going to solve one day. They will continue to evolve, as our defenses do, probably forever. So while your organization may secure its own data very well for a time, there will always be breaches somewhere. Your first goal is to avoid suffering a direct data breach. Your second goal should be to turn this seeming onslaught into a positive for your business.

If it feels like there are more and more breaches, that’s because there have been. According to Sophos, 2013 was the worst year for breaches yet, with 2,164 separate incidents and over 822 million records exposed. And breaches such as the Target breach and the potential security gap known as Heartbleed are making bigger and bigger news. Is there a way to use this stream of sky-is-falling news? If you’re in the IT security field, the potential market is obvious, but that’s not the only way to use a breach to your advantage.

Nobody Buys Umbrellas When the Sun is Out

Breaches can be useful in raising topics of conversation inside an organization. Though she felt bad for Target, which recently suffered a breach of 110 million records, head of Wells Fargo merchant services Debra Rossi said, “It got the industry moving on the consumer side and the merchant side." It’s difficult to get executives to see the benefit of certain upgrades until you have a specific example to show them of what can happen without the upgrade. Breaches often help boring but important topics, such as investing in security certificates, gain the attention they need for implementation. Your organization is unlikely to buy the umbrella you want unless you prove how likely a thunderstorm is.

Let Me Take This Opportunity

Another way to use a breach is in communications to your customers. You don’t have to sell security software to offer value. The first thing you can do is spread the news. It’s often important for affected parties to act quickly after a data breach, so notifying your customer base in the hope of reaching any who might be affected is an important service.

Software companies can also use this time to show the value of the maintenance they provide. IT shops often find it frustrating to pay maintenance, particularly when they don’t feel like they use the support that comes with it. A breach can be a good time to show these customers the value they receive. It can also be a good time to remind customers who have lapsed in maintenance that you have a patch that could solve their problems, if only they’d come back to the fold.

These scenarios don’t apply to every organization, and that’s OK. With some creative thinking, you can find a way to benefit from the breaches that seem to occur around us every day. Because to be sure, those breaches won’t stop coming. You can look at them as disasters or you can look at them as signs of a growing, evolving IT ecosystem, one that is lush with business opportunity.