I want to address two topics in this post that you may not have yet seen on the roadmap that we are working on for GroupWise and Enterprise Messaging. Recently we have shared these topics with customers and partners at the Open Horizons event in Berlin this June and TTP event in early July here in Provo. We also wrote an article and published it in the Open Horizons Magazine.  (Issue 41- The Summit Issue). So some of you may be aware of this work, but if you don't get the magazine and didn't attend the events this will be new for you.

At the events the sessions were titled "Beyond the Roadmap and off the Radar".  I wanted to give a glimpse at some work being done that we haven't pegged to be released in a specific version. We are getting closer to being able to determine a release so I think now is the time to start talking about them.

The first topic is about advancing the architecture of GroupWise and its components to the next level. We want to be able to just as easily deploy on-prem, private/hybrid cloud and our own hosted version of Enterprise Messaging. In doing so we want to engineer, maintain and release one set of code that works for all. That way when we add new features, make updates, release patches etc...  we can do it once and release to all types of deployments simultaneously. IE you don't get new feature being added to just the hosted/cloud version followed by those features maybe getting to the on-prem version months later if at all.  It all happens at the same time.

To this end we are working on "containerizing" all of the back-end components of GroupWise. This will make installation, patching, upgrading, and maintenance of the components much easier.  It will also allow us to then start to break the components up into micro services that can be launched as the load on the system increases and shut down when not in use. (That will be the next phase, imaging launching the DVA only when needed or spinning up a second POA as load increases and shutting it down as load decreases)

We will talk more about specifics for containerization in later posts, but in the near future the intent is that you will be able to deploy all of the GroupWise back-end services in docker containers.  Our current goal is to get all of our internal systems running in containers before the end of the year and then be able to project a release. Most likely it will come in phases, so stay tuned.

The second topic actually combines the first topic of "containerization" with another ongoing effort of a new client. We are working on a completely re-designed and built from scratch version of the Web client. With the current webaccess client we had really reached a limit in how far we could effectively go, feature parity was difficult and scaling was not ideal. In addition to that, it isn't an effective mobile client.

The new Web client will be completely containerized and delivered as a docker container. The design is new and fresh and most importantly completely responsive.  One Web client for Desktop Browsers, Tablets and Mobile. No more templates!

This new Web client is still in early development stages but I would like to give you a preview of what is coming.

One of the goals is to make it easier for users to transition from the Windows client to the Web client easier.  So while we don't want to make them look exactly alike, they should feel familiar.  In fact when we are adding features in to the new Web client if the right way to implement them doesn't match the way they are implemented in the Windows client we are going back to the Windows client and making changes there. This is a combined effort between the teams to have a similar experience for the user.

So let's take a look at this new design: 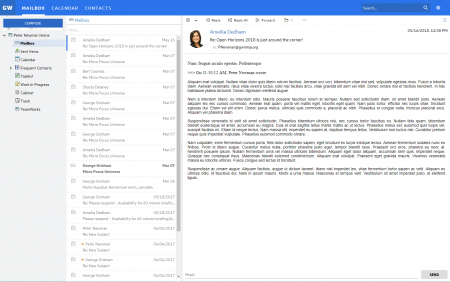 As you can see, this is a very fresh, clean completely new web client that looks fantastic.  Similar to the Windows client you have your folder list on the left, your contents in the middle and yes on the right hand side you have the long awaited quick viewer on the right.

It looks very similar to the same users Windows client: 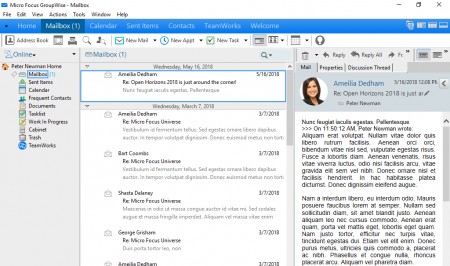 Back to the Web client:

At the top you can Navigate between the Mailbox, Calendar, and Contacts. In the middle under mailbox you have a Filter to search that specific folder you have open and at the top right you will find your Global Search. Above the message you have all of your message actions such as Delete/Trash, Reply, Reply All, Forward, Move to Folder, and more...  Notice at the bottom of the message you can even type in a quick reply and just hit send.

The UI for performing functions and actions is very flat an easy to use. For example if I hover the mouse over Compose the options slide out instead of making you click and open a popup or new window:

Settings will work this way as well.  At the top right you have the standard Gear icon for settings.  If you select that and choose a setting like Category Management it will also slide out:

My favorite part and top requirement for the new client is that it is fully responsive.  As the screen size changes it collapses and adjusts without loosing functionality.  For example if I view the main screen from an iPad you get the following view: 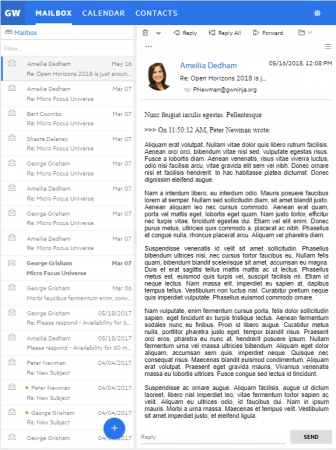 The folder list is not displaying on the left, but its not gone. Simply click Mailbox at the top and it slides right out: 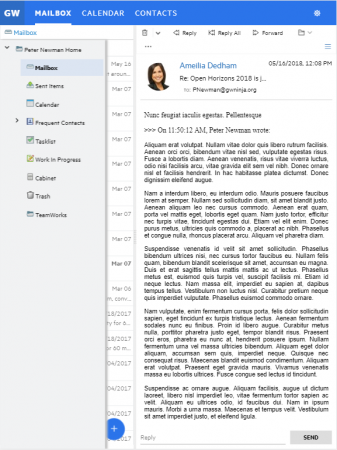 The same design is responsive for phones as well.  If I move to my iPhone I see the following view: 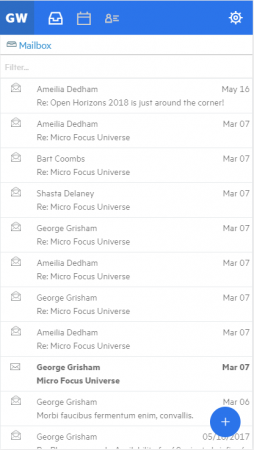 Just as with the iPad I can click on mailbox to slide out the folders: 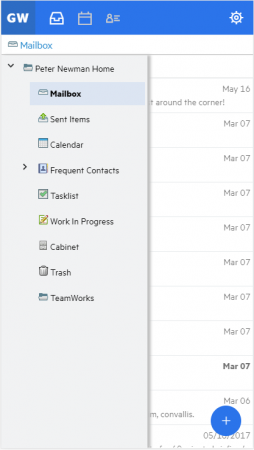 If I select the big blue Icon at the bottom I also get my compose actions: 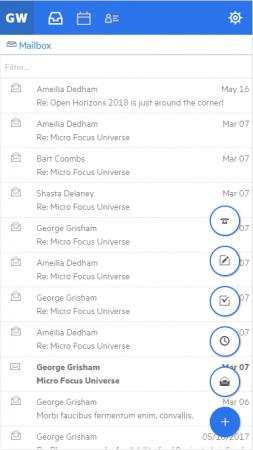 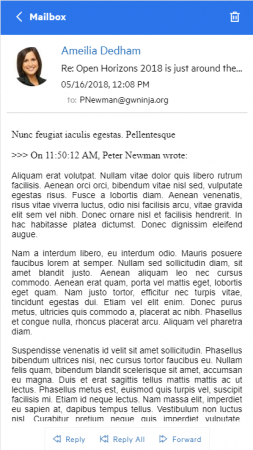 And of course the responsive design supports portrait mode (above) and if you rotate your phone to landscape mode and have a bit more screen real estate you can get the quickview back, even on the phone! 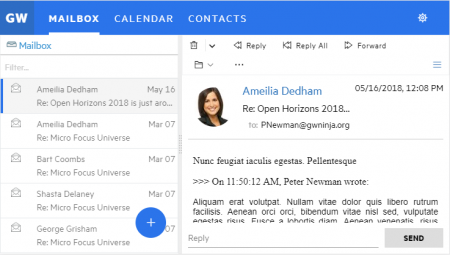 I have just scratched the surface here. I still want to show you all the features in the calendar and address book but we will save those for later. In fact in the next few weeks look for some demonstration videos to be posted on YouTube and I will link them here as well.

When we have demo'd this live and discussed with customers and partners the first question is,  "When can I get it?"

The answer is soon.  It will not ship as part of 18.1. However, the benefit of building this as a container is we can ship it at anytime, its a completely independent component. 18.1 is currently scheduled for the later second half of this year. In that same time frame (maybe before, maybe a bit later)  we will make a Tech Preview of this new Web client available to you. Tech Preview means we won't be supporting it yet and you should not run it in production, but we want you to play with it and give us your feedback.

After Tech Preview when we officially ship this new Web client it will replace the old Web Access client. Meaning we will no longer put new features, patch or support etc... This will be the new Web client moving forward. Since this is currently off the roadmap I don't want to give an official date and timeframe of it officially shipping, but it should be sometime between 18.1 and 18.2 which is tentative for second half of 2019.

I hope you are excited about containers and the new client. I am excited to share them with you and hope to have them in your hands and your users using the new client ASAP.

Stay tuned for a deeper look into the new client.