You can bring in GroupWise Distribution Lists in Novell Vibe as Groups by tweaking the LDAP Group filter. Here is a screenshot of the LDAP configuration page showing the changes made to the filter. 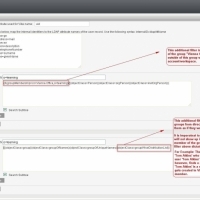 I purposely tweaked the user filter (which is not necessary for bringing in GW Distribution Lists) to show a scenario where the distribution list membership will be limited to the users who exist in Vibe. More specifically, let's look at my user filter:

The part in bold text is what I added to tell Vibe that it should only register/sync users who are members of group 'Vienna Office'. Sometimes, organizations do this because their directory contains hundreds or thousands of users who are not going to be using Vibe and therefore a subset of users is needed.

So, after a sync Vibe now has these 3 registered users. Even though user 'Tom Atkins' is a user in the directory, he was not added to Vibe due to the above user filter.

Next, we want to bring in groups and distribution-lists in Vibe, so we use this group filter:

The part in bold text is what I added to tell Vibe that it should create/sync distribution-lists in addition to normal groups. Let's assume we have a distribution-list called 'All Employees' which contains all full-time employees of the company. This would include our 3 Vienna Office users mentioned above and also 'Tom Atkins'. But, when Vibe creates/syncs this distribution-list, it will NOT add user 'Tom Atkins' because he is not a valid Vibe user.

With this in mind, the above workaround will work in bringing GroupWise Distribution Lists in Vibe as groups so that when you send emails or share entries in Vibe, you can select them as groups.