After importing the content into ZCC, the remaining steps are the same for both NCC and ZMAN. 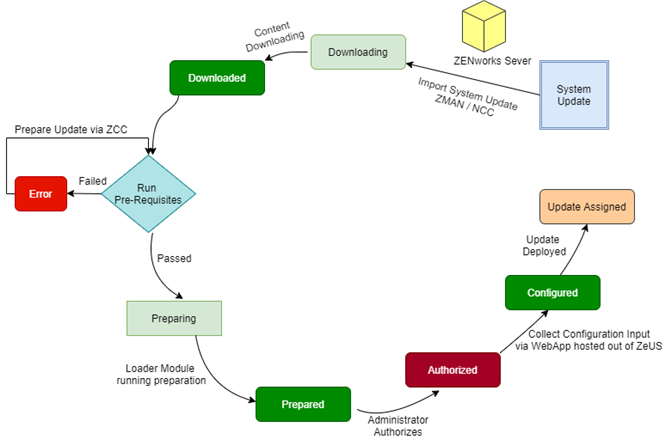 Refer to the following screenshots for more information:

Pre-requisites log: You can debug this log file to verify whether the pre-requisites check is completed or not.

A lot of processing happens during the preparation phase. After downloading or importing the update, a queue action "system.update.preparing.stage" is created that starts the preparation of the update and involves the following steps:

This step involves the following points:

a. Creation of pending entries for system update content for the Satellite Servers.

b. Creation of a recurring queue action on all the Primary Servers.

For all the targeted Satellite Servers, the system update content, pending entries need to be created in zContentSyncState.For this purpose, a recurring queue action "create.su.content.pending.entry.queue.action" is created with a repeat frequency of 20 minutes. This queue action will gather all the valid system update contents and create pending entries for all the Satellite Servers by calling the stored procedure "sp_zContentSyncState_update". After creating these entries successfully, the recurring queue action will be deleted.

The "create.prepare.state.actions.queue.id” recurring queue action is created on all the Primary Servers.

Responsibilities of the handler for the queue action are stated below:

The path of the web app is shown in the following screenshot: 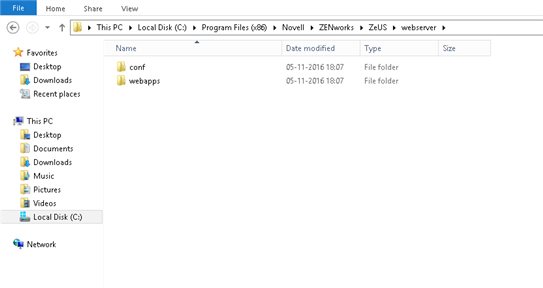 >  Creation of Update XML: The update XML for INSTALL and PRE-INSTALL commands are also constructed as part of the preparation activity. These files can be found in the prepare folder under the ZeUS work folder:

> Creation of UpdateInfo XML: The generated updateInfo.xml contains information about the update, it's identifiers, the list of updates it requires and/or supersedes, and whether it is a role-based update or not. This XML file will be inside the "prepare" folder under ZeUS "work" folder. After all the above steps are completed, the update is added to the list of prepared updates list, maintained in the "updates-prepared" file that is available in the following locations:

2. This queue action performs the Preparing activities on the servers. After the preparation is completed on all the servers, additionally, a monitor thread is started that will move the update status to "PREPARED".

The "PREPARING" state is a link which allows you to monitor the status of all the servers. This dialog also allows you to ignore any unreachable server in the zone.

Monitoring Thread and Ignoring servers
The Monitor Thread runs in the loader context and logging will be seen in loader-messages.log.

Every step performed during the preparation stage will be logged in to prepare-update.log in the logs folder.

Prepare-update log: The start and end of the System Update Preparation phase are tracked in Prepare-update.log.

During the process of preparation of an update, the status of the update moves to "PREPARING". This is a link when clicked displays the progress of the activity (Refer to the below image).

All the Primary Servers in the zone are monitored to ensure the preparation is complete and the update is then moved to the "PREPARED" state. Only when all the Primary Servers in the zone are prepared, then the update will proceed with configuring, authorizing, and finally deploying the update. Now, if some server in the zone is unreachable or for some reason you want to ignore the preparation activity on those servers, you can go ahead and mark the server as ignored. This choice will be persisted in the prepIgnored column of zSystemUpdatePrepareStage table against that serverUID and updateUID. In this case, preparation will still proceed on the "ignored" servers, but servers will not be monitored. These servers will then have to be manually updated. 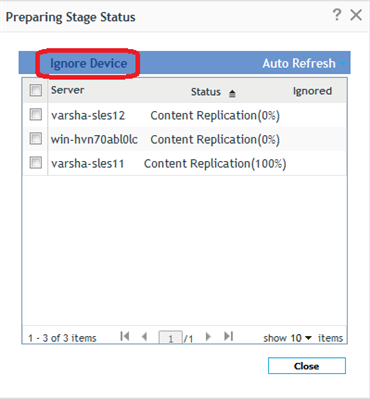 You can also re-trigger the preparation of the update by using the "Retry Prepare Update" action. When you retry the prepare update, if all the zone-wide prerequisites were met, or if only optional prerequisites were failing and the administrator chose to ignore those failures and continue, then, in these scenarios the evaluation of prerequisites will be skipped. Two entries are created in the "zOpaqueData" to keep track of this information.

The keys for the same are as follows:

All the column names are self-explanatory except the SUID column, which is nothing but the updateUID. For a given update, this table will have one entry for each of the Primary Servers in the zone. An entry is created as soon as the preparation process starts. As already mentioned, an option is provided to ignore a server from preparation. This will be updated in this table and marked with the help of prepIgnored column. The "status" column is an interesting one. it is a bitmask that encapsulates the progress of all stages involved in the preparation process.

This table is of vital importance to track the progress of the preparation of an update. We have a monitor thread that keeps monitoring the progress on all the Primary Servers and when preparation is successful, it will move the update to the Prepared state. If a server is ignored from preparation, the prepIgnored flag is set and those servers will not be monitored.

After successful completion of the prerequisites check and preparing process on all the Primary Servers, the update is Prepared and ready for the Administrator’s authorization, which is the Awaiting Authorization stage.

The Administrator can authorize the update by click on "Authorize Update" in the Action dropdown.

After the system update is Prepared and Authorized, the Configure Update option will be shown only if the update requires inputs. If the inputs are required, the Configure Update web console is opened in a new tab, with the single sign-on, where you will be prompt for the inputs. After the inputs are provided, the data is saved into the "zSystemUpdateConfiguration" table and each page-wise inputs will be saved to the "zSystemUpdatePageInputs" table. Inputs, which are gathered, can be changed until the update is deployed to one of the devices.

Note: If there are no inputs required, then the Configure Update option will be disabled after the Administrator authorizes the update.

After the system update is Prepared, Authorized, and Configured, it can now be deployed to all the devices in the zone. The update can be deployed to a stage or manually selected set of devices. As soon as we deploy the update, a "stop services" Quick Task is created to stop services on all the servers and after successfully stopping the services, a Remote Method Invocation asking ZeUS to launch the preglobal jar. So, the point to note here is that going forward, ZeUS will launch the preglobal jar. Once pre-global actions are successfully executed, ZeUS will update the "globalActionsRun" flag in zSystemUpdateEx and proceed with the launch of configuration action "PreGlobalAdvanceNextStage" to advance to the next stage if an update is assigned to a Stage and is not set to postpone staging. Once this stage is completed, ZeUS will be refresh and it will launch ZENUpdater to perform the package update. Before you click Finish in the Deploy update wizard, a pop-up window will be displayed. In the pop-up window, a link will be displayed, where you can track the system update progress. The link will be similar to https://ServerFQDN:7444//systemupdate/sustatus. The FQDN in the URL can be replaced with the server IP/name where the update is in progress, and the status web app can be launched.

When an update is deployed to a set of devices, a "stop services" quick task is created for all the servers, except the server on which the preglobal actions are executed. ZeUS will process this quick task, which goes ahead and stops the loader, server, and monitor services on the Primary Server.

Note: A stop services thread running throughout the execution of the preglobal actions. This thread will try to stop services every 10 minutes, thus ensuring that the services remain stopped.

If for some reason, stopping of services fails on one or more servers, the update moves to the "ERROR" state. Clicking on the Error link displays the list of servers on which the task failed. The Administrators can then either go ahead and manually stop the services or redeploy the update.

Following is a sample screenshot of the dialog that lists the servers on which stop services Quick Task had failed. 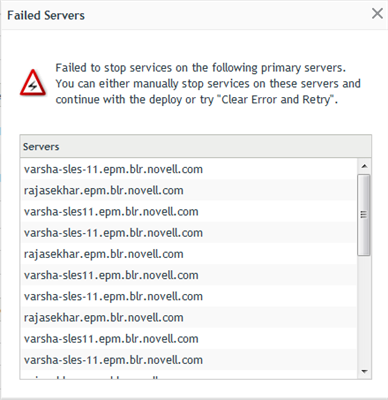 Note: For more information, refer to "loader-messages.log” on the device that triggers the quick task.

After successfully deploying the System Update to the device, the status will be changed to Scheduled.

Following are the images that display the system update statuses:

Status of Updating the Schema

Status of Updating the Package

We can also track the System Update Status by logging into the deployed device by clicking the ZENworks icon in the taskbar. 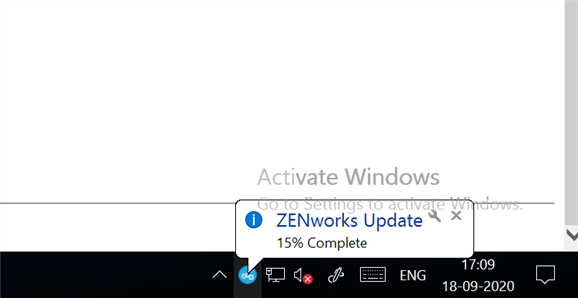 After completing 100 % installation of System Update, a prompt is displayed to restart the device.

Note: After the System Update is completed on the Primary Server, there is a stage where the system update reports status back to the Primary Server. This Primary Server rebuilds the deployment package, if the rebuilding package fails, then the web app status is displayed as “Error” instead of “Finish”. In these situations, you can check by logging into ZCC as shown in the below screenshot, or in “loader-message.log”.

Launch ZCC after the services are running. In ZCC, go to the System Update page, check the status, and deployed the build version on the configuration page.

Deployed Build Version might take some time to reflect the data.

Note: To track the individual system update status, you can see the System-update.log on the device.