I am writing this post out of my quest for ZCM Bundle Action answers. I realized that the Bundle Actions and Schedules did not appear to behave exactly as I expected in ZENworks Configuration Management.

I wanted to test the distribution, install and launch actions and also the schedules that can be defined during Bundle Assignments or just in an On-Demand Install Bundle, Launch Bundle or Distribute Now. (See Assign Bundle Step 3) 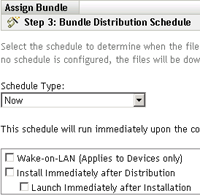 Dependent Bundles that did not meet system requirements; does the parent bundle continue, fail or what?

Distribute now does not set a schedule.

Install is dependent on Distribution Schedules or Launch Schedules

Bundle Action Options are much more powerful than at first glance.

These three install options are independent of Bundle versions and are dependent on Distribution Schedule or Launch Schedule. This means that if the Bundle Action Options are set to Install Always, the install actions will always happen in the following scenarios