You asked for it, we delivered it, Install Executable Action

If you’ve been a ZENworks administrator for very long, you’re probably well aware of the steps required to create a bundle that will install a traditional setup.exe installer or any type of application that needs to run an executable. It typically looks something like the one shown in the screenshot below:

Essentially, the flow has been:

That’s quite a few hoops to jump through and it means you always need at least twice the disk space for the installer because it is going to end up in cache and in the temp folder.

Well, you made it clear that this was something you wanted to see enhanced. In fact, with close to 150 votes in the ideas forum it was the most important thing to the community at large. So, in ZENworks 2020 we’ve added a new action to Windows, Linux and Mac bundles. This action is the Install Executable action. This action is basically the equivalent of the Install MSI action, but for executable. Here’s how it works. 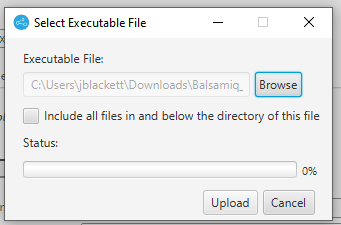 That’s it. When the application is run, the executable and any supporting content that was uploaded is distributed to the cache folder. The executable is then run directly from the cache folder using whatever parameters were specific. This data stays on the machine in cache so that if a repair needs to be performed then it is there, just like it always has.

It’s important to remember that only clients with the ZENworks 2020 Agent will know what to do with this action, so make sure to upgrade your agents soon. I hope you’ll find this feature helpful! Keep the good ideas coming!