If you have ZENworks apps that set configuration settings for your XP and 2000 workstations, you may want to prevent those apps from changing the settings on Windows 7 workstations.

To do this, modify the ZENworks Apps on their "Availability" tab so that it will read the registry key named "HKLM/Software/Microsoft/Windows NT/CurrentVersion/ProductName"

The best way I've found to filter it is to require the key to fit XP or 2000 and anything else is excluded from running the App, as shown below.

Also, I set an environment variable in my login script to match the 10.xx portion of the user's IP address, then I require my zen apps to read that variable and if it is not 0A11 (10.17 in hex), then my user is on a machine outside of my local lan (using a machine at a remote site) and in that case I also prevent the zen app from firing. This prevents the possibility that one of my users might visit another site, login to one of their workstations, and the workstation wind up re-configured with our locally preferred settings. 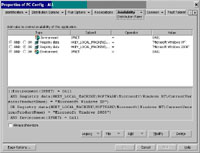