BOT Governance: How Digital Workers’ Identity can be Governed

What is a BOT/Digital Worker? 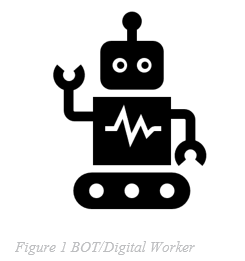 In the last decade, one of the revolutionary themes to improve business efficiency is automation. Automation of various time-consuming, repetitive, labor-oriented processes is not only improving efficiency but also saving millions of dollars in operating costs, the reduced human error is a bonus.

The dictionary defines automation as “the technique of making an apparatus, a process, or a system operate automatically.”

As per the International Society of Automation, automation is "the creation and application of technology to monitor and control the production and delivery of products and services.”

In IT automation “Robotic process automation” is a technology solution to reduce or remove human input and automate the process.

Robotic process automation is commonly known as RPA where "Robotic" describes the program that you can set up to do work—the same way you would—with computer systems and applications. “Process” refers to the work that you want to get done. And “Automation” is what it sounds like—making work happen on its own.

RPA bots, or just "bots", are software programs that you set up to do digital work. They’re not just simple chatbots - they're a Digital Workforce. RPA bots can interact with any system or application the same way a human worker would. It’s as simple as showing your bots what to do, then letting them do the work.

The RPA bots are also known as digital workers, from IT applications and system perspective they mimic human workers.

How is a BOT Created?

Once the ticket moves into the fulfillment queue, Smith from the fulfillment team will get notified that he needs to create an account of John in the Web Application “KnowledgeNet”. Now Smith will log in to the ticketing system and validate that John’s Manager Robert has approved the ticket. He will get John’s profile information from the ticket. Next Smith will log in to the administrative portal of “KnowledgeNet” and navigate to account creation screens. He will fill in John’s profile information and click on submit/create profile button. After creating John’s account in “KnowledgeNet”, Smith will change the ticket status to “Resolved” in the ticketing system and notify John that he has access to “KnowledgeNet”.

In RPA the human worker Smith can be replaced with a digital worker “KnowledgeNet Account Creation BOT”. This bot will do the same steps as Smith. It will open the ticketing application, validate the ticket, log in to the “KnowledgeNet” administrative portal and create an account for the requesting user, notify the user and finally resolve the ticket in the ticketing system.

So where is the problem?

The privileged accounts have three categories:

The BOT accounts are distinct from privileged accounts, they are more normal human accounts with elevated rights. This causes several security concerns.

Following are the impacted domain due to the introduction of BOT Identity.

The organization implementing automation using BOTs must have documented BOT Governance, it can be a slide deck or a detailed manual, or simply a one-pager. The documentation must be reviewed and approved by key stakeholders including the cybersecurity group, internal control staff, application owners, data owners, and business owners apart from the RPA BOT implementation team.

From digital workers’, identity management and governance perspective following are the key components for BOT Identity and Access Governance.

The responsibility of governing body is to provide oversight of the RPA program. Oversight includes reviewing risks, ensuring adequate risk mitigation, and confirming which processes can be automated (through process assessments, including reviews of prioritization criteria, process type, and organizational area).

The major stakeholder in this body should be:

Implementation organization construct includes the people accountable for operational delivery. It should be composed of a hybrid of IT, Cyber Security, and business professionals. Even if your IT group leads all development, individuals in business units will need to support the documentation of existing processes which must include existing identity and access management processes, help define requirements for the automation solution, and participate in user-acceptance testing.

Implementation organizations must have clearly defined roles and responsibilities for each person who owns a component of operational delivery, regardless of whether that person is a direct report to the leader of the program or a staff member sitting in another team who provides part-time support. It must define the support model post-deployment, including the training and development plans for the individuals fulfilling the various program roles.

The IAM Team lead will help the application owner, data owner, and business owner to define the ownership of BOT Applications, BOT Identities, and BOT Accounts.

This governance component’s primary responsibility is to define the stages through which automation ideas must progress, from ideation to deployment and benefits realization. Answer the following questions: How will automation ideas be generated and captured? What criteria will be used to assess opportunities and determine if they should be developed? Will processes be reviewed before their being promoted into production? Who needs to review or approve an automated process before it’s used by the business? What software development life cycle will be employed? What change management processes need to be executed before a human turns a process over to a bot? What documentation is needed? How will process maintenance or support for processes that break post-deployment be managed? What business continuity plans are needed to ensure any potential interruptions to critical processes don’t negatively impact the business?

The cybersecurity team including the IAM team will review each process by the standard and process defined. He will be responsible to define the process of following:

The internal control team will review existing internal control policies, and consolidate risks that have been identified by key stakeholders at the program level and the individual automation opportunity level. They will

create a risk register those details on how each risk is mitigated and review it at regular intervals.

The risk mitigation measures in the register should translate into controls that are embedded within the operational life cycle. This section should cover these controls and how implementation will maintain adherence to existing internal control procedures, including documentation requirements for audits. Bear in mind that some existing procedures may not apply to bots. The internal control team needs to agree to these exceptions, and a standard treatment for digital workers needs to be established. Specifically, the approaches to bot-naming conventions, the storage of account credentials, internal control reviews for BOT processes before deployment, and internal audits of critical processes performed by bots should all be agreed on and documented.

Most organizations should already have existing documentation related to technology governance. The existing technology governance documents will require updating to incorporate RPA risk. When engaging stakeholders, particularly in the IT and cybersecurity groups along with representatives from the selected RPA software vendor, the following topics will be important to discuss and document

Also, implementation of general IT controls, including network security, audit logs, the applicability of segregation of duties, user access provisioning, encryption, and use of privileged user accounts must be considered.

BOT Governance Use Cases in IAM

Since BOTs mimic the human operator behavior all use cases applicable to human identity will apply to digital worker/BOT Identity. Following is a high-level list of applicable use cases for BOT Governance

The NetIQ Suite has capabilities to provide BOT Governance. All the use cases that we have discussed in the previous section can be realized by NetIQ Suite products.

The NetIQ platform already manages applications, identities, accounts, and privileges. To support BOT Governance and distinguish them from the human identity they need additional attributes to identity and application.

This additional attribute can be an identity attribute, a group, or a separate OU/nested OU.

The NetIQ Suite can offer a complete BOT Governance framework to govern BOTs (RPA/Non-RPA) including BOT ID Management, BOT Access Management & Certification, and BOTs Credential Management. The solution can have an analytical dashboard that will help customer to find the BOT ROI analysis.

With decades of experience in corporate security, Micro Focus has deep knowledge of every aspect of zero trust. We can shine a new light on your people and data, showing you the best ways to protect them while working with your existing solutions to make them a part of a coherent, up-to-date, well-functioning whole. Learn more at CyberRes.com.