Developing Your Strategy Against Targeted Attacks - A Technical Series

by MigrationDeletedUser in Security
Targeted attacks, often referred to as Advanced Persistent Threats (APTs), are notoriously difficult to explain and define. And the containment of targeted attacks is even more daunting given the fact that a single product cannot do it. Almost everyone universally believes that targeted attacks do not have a technical solution. Targeted attacks are not new; they existed before under different names. And now, not surprisingly, a ‘targeted attack’ is not a single attack but multiple attacks with a common goal. Due to the distributed nature of targeted attacks, it is often difficult to categorize them into external or internal threats because most of the time the origin and destination boundaries disappear. 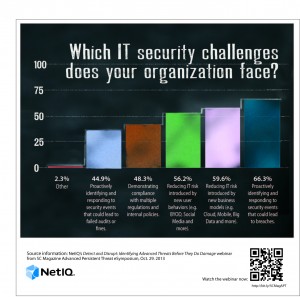 The simplest possible targeted attack would be using a Botnet to attack an organization and at the same time using Social Engineering techniques like Spam, phishing or simple human contact to gather enough data to exploit the organization. These are two different attack vectors but have a common goal. While it is not impossible to contain this kind of attack, it definitely has low chance of being contained if the attacker is persistent. Then there is the problem of applying a timeline to the targeted attack. Does it take seconds, hours, months or even years for a targeted attack to succeed? More often than not, security products will be obsolete, and we will need to upgrade to the latest and greatest sets of defense.

Today begins a series of topics that discusses how to best develop a strategy against targeted attacks. The series will be divided into four parts; a summarized view is given below:

1. Establishing a Baseline: In this section we will discuss the importance of establishing a baseline. Baselines determine the scope of risks that an organization faces and needs to be adjusted accordingly to counter targeted attacks.


2. Security Intelligence and Analytics: One of the most important strategies to counter targeted attacks is to aggregate security incidents and events from a variety of sources.  Aggregation will allow us to correlate and analyze the data in a comprehensive way which may otherwise not be done. To accomplish the aggregation, correlation and normalization of data, a central security management tool like SIEM is mandatory. Both real-time and predictive analytics is vital for an organization to deal with targeted attacks. We will be covering the following topics in security intelligence:


3. Identity Intelligence: Identity intelligence allows us to have granular insight into user privileges, roles, and their activities in real time. This leads to persistent attack detection, potential compromised users, and data leakage attempts by certain identities. In identity intelligence we will be covering the following topics:

4. Taking care of the Confidentiality, Integrity and Availability (CIA): It all comes down to preserving the confidentiality, integrity and availability of resources and assets of an organization. At various levels, resources can be vulnerable, but by following industry standards, regulations and best practices, one can minimize and reduce the impact of a targeted attack. We will discuss the following aspects of data protection for maintaining CIA:


When we conclude the series, you will have framework considerations for developing a comprehensive strategy to defend against targeted attacks that best fits your organization’s needs. All necessary information on how to deal with each scenario will be discussed and guidance will be provided to achieve a solid defensive approach to tackle targeted attacks. Given the complexity of targeted attacks, the strategy does not necessarily have to be complicated. Rather, adoption of a firm security policy and sticking to fundamentals will work to significantly improve your overall security posture for the protection of your most vital information assets.