IT Monitoring: Untying the Gordian Knot

by MigrationDeletedUser in Security
It’s a complex world out there. There’s no denying it.  This is especially true in the IT world—where admins are expected to keep systems running smoothly.  However, no matter how you slice it: there’s no way around the true complexity of IT. Physical and virtual machines, networks, operating systems, and applications all have to work together to deliver a service.  It’s a knot of Gordian proportions, but most people don’t know that.  To them—IT simply works.  And if it doesn’t . . . well . . . you’re swamped with help desk tickets, phone calls, and email.

Because IT works most of the time—and because most people never see the complexity:  there is an illusion of simplicity when it comes to delivering IT services.  However, this illusion of simplicity is also creeping into IT administration itself.  We want IT monitoring to be simpler—but environments are getting more complex.  The clash of our desires with harshness of reality often spurs innovation.  But equally, if we ignore reality in favor of our desires—disaster ensues.

Simplicity in the IT world is double-edge sword, but is that sword perfect for cutting through the complex, Gordian Knot of IT monitoring?

I’ve referred to this whole IT monitoring conundrum as a Gordian Knot. As many people know, Alexander the Great supposedly solved the problem by cutting the knot in two.  That’s the popular version of the legend, at least.  I’ll call that the “brute simplicity” approach.  It’s the way many people choose to solve their IT monitoring problems today.  Just give me simple monitoring – and easy answers.  I don’t care about the details.  It’s as simple as slicing the knot apart . . . as long as you don’t intend to use the rope again. "Have you tried turning it on and off again?” is an example of this simplicity approach to IT problem solving.  There's no doubt it is sometimes effective—but it doesn't offer any insight or lead to long-term resolutions for recurring problems. 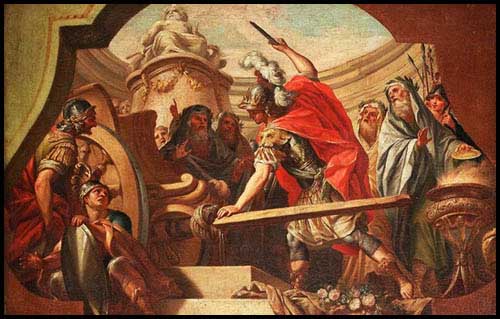 In a lesser known version of the Gordian Knot legend—Alexander removed a key lynch pin and disassembled part of the chariot—exposing both ends of the infamously knotted rope.  This allowed him to unravel the knot without resorting to drastic measures like hacking it apart.  I like this version better because it shows a detailed study of the problem and an innovative approach to solving it.  Better yet, no rope was harmed in the process.

AppManager 9 combined with Operations Center delivers both the simplicity IT desires when viewing the overall health of the environment and its components, without sacrificing any of the drill-down capabilities actually needed to troubleshoot and resolve individual IT problems.  Perhaps by taking both approaches to IT monitoring and problem solving, you too can become like Alexander the Great and conquer your own Gordian Knots when it comes to keeping your business up and running!