by Monica White in CyberRes

Insider threats are all too common today, and they also happen to be one of the more complicated types of threats to detect. Having a focused, intentional insider threat program can make a huge difference in a company’s preparedness to detect, investigate, and respond to these kinds of incidents. 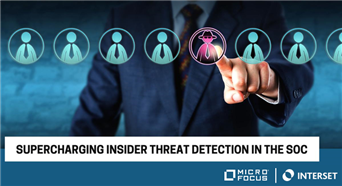 It should come as no surprise to our readers that insiders play a significant role in data breaches and security incidents. Just this year, the newest Data Breach Investigations Report by Verizon found that 34% of data breaches involved internal actors. Further to that, 15% of data breaches were caused by misuse of authorized users. The report also found that 56% of breaches took months or longer to discover—a troubling fact given that the time-to-compromise of a data breach can often be measured in minutes. And, unfortunately, these statistics are reinforced by the security incidents we see in the news. Insider threats are all around, and no one is immune—not even cybersecurity companies.

A cybersecurity publication recently revealed that global computer security company McAfee has filed a lawsuit against three former sales employees, claiming that they stole trade secrets before joining Tanium, a competitor in endpoint security. The three employees resigned from McAfee late last year and earlier this year, and, according to reports, their successive exits raised a red flag within the company. McAfee investigated the employees’ computers and discovered a “pattern” of accessing and swiping company information before and after exiting the company, including emailing information to personal email addresses and transferring files to personal file shares and USBs. The company also found that one of the employees accessed a database with customer order information.

McAfee was able to generally identify that sales and financial documents were compromised and now are in the process of trying to determine the exact files through a court order. It appears McAfee is seeking damages for loss due to the misuse of the stolen trade secrets.

McAfee isn’t alone in its insider threat woes. Last month, Canadian credit union Desjardins—one of the world’s biggest banks—announced a massive data breach impacting 2.9 million members. The culprit was one of its own employees.

According to Desjardins, an “ill-intentioned employee” collected member data from a database and shared the information with a third party without authorization. The data included personally identifiable of home users and business customers. The breach impacted more than 40% of the company’s member base, and Desjardins is introducing new security measures to protect its members’ data. The employee responsible for the breach has been fired.

Both incidents show the potential damage that can be done by malicious employees. With authorized credentials, an employee can wreak havoc by legitimately accessing confidential data for illegitimate purposes. In cases like these, it’s critical to be able to understand how employees are engaging with your business systems and assets in order to identify if there is a real security risk. In McAfee’s case, the company has been able to identify many clues about the actions taken by these mischievous employees, and they’re now in a much better position to be able to identify any facts that they’re still missing and pursue reparation.

Of course, in an ideal world, a security team will catch these types of actions very quickly—before significant damage is done. But the difficulty with detecting an insider threat is that the behaviors that indicate that something is amiss can be very subtle and may not seem unusual unless seen in the context of previous behaviors or peer behaviors. An insider threat program needs to take into account the complex nature of insider threats and strategically utilize the right tools for detection and investigation. When starting or evaluating an insider threat program, there are five things a SOC team should keep in mind:

Ultimately, the best approach to a comprehensive insider threat program is one that covers many bases. Insider threats are complex, but catching them doesn’t need to deplete your SOC team’s resources.

To learn more about how Micro Focus Interset can help your organization jumpstart an insider threat program, contact us.