Three States of Vulnerability…for the enterprise

Lately there have been several stories about big $$ penalties for privacy violations or breaches. This is real news to those companies. Since the majority of successful breaches target exploitable vulnerabilities residing in the application layer, enterprise IT departments must be extra vigilant about application security. Many enterprises are still early in developing their application security program, so let’s dive in to some fundamentals about AppSec. 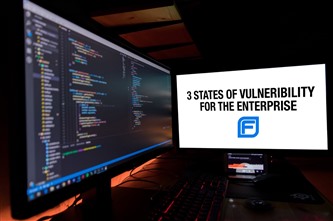 It has long been understood that a successful attack requires the exploitation of reachable vulnerabilities, which result from inherent weaknesses in software.  Got it? Ok, let’s first define a few common terms used in most AppSec discussions.

To understand the types of vulnerabilities and threat levels you need to guard against, it helps to use the following structure: “known knowns, known unknowns, and unknown unknowns.” In terms of cybersecurity, here’s how you can understand them: 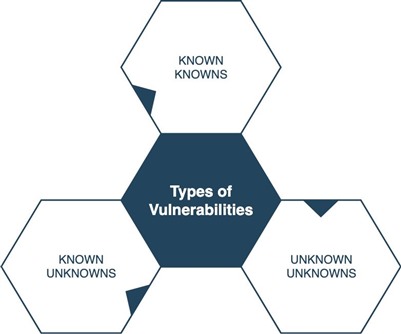 When a vulnerability is discovered in released code, the most obvious course of action is to fix it, patch it, and make the patch available to customers. But this is not always the case. If your organization writes software and also runs software written by other organizations, then there are several models for vulnerability disclosure and multiple “expert sources” that can apply to you—depending on whether the code is yours (“my code”) or another party’s (“not my code”).

Anyone, especially anyone with a background in software security and software vulnerabilities, can discover a weakness in software code. People looking for vulnerabilities are often referred to as researchers. They may be contributors to a “bug bounty” program, or they may work directly with a software vendor to discover and report weaknesses in code before and after software release.

The CVE and Vulnerability Databases

Most security experts recognize that the CVE and the NVD provide valuable informa­tion to serve as guidelines or bare minimums for organizations. The im­portant thing for application security teams to do, in return, is to stay up to date on reported vulnerabilities, apply security patches immediately as they become available from their software providers, and implement a patch management program as a routine part of IT operations.

If this discussion resonates with the enterprise security challenges you are trying to solve, I highly recommend the The 2019 TechBeacon Buyer’s Guide to Application Security. You’ll learn about “What processes and products enable application security risks to be mitigated?” and “What questions do application development teams need to answer in order to determine their next steps in application security risk mitigation?”

Fortify offers end-to-end application security solutions with the flexibility of testing on-premises and on-demand to cover the entire software development lifecycle. Complete software security assurance with Fortify on Demand -our application security as a service - integrates static, dynamic and mobile AppSec testing with continuous monitoring for web apps in production.