The DRA 10 web client UI for editing multiple objects seems broken or is at least unintuitive.

The EDIT button for editing a field is situated below the field it edits, and the spacing between the items seems broken; sometimes the EDIT button overlaps a field. See screen shot: 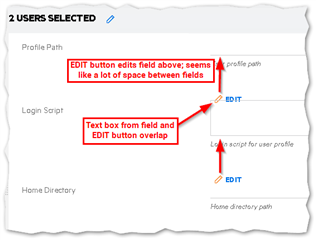 In addition, there seems to be a bug: If I customize the properties form and specify a field as hidden, the multi-object edit page shows an EDIT button for the hidden field (even though the field is not visible). I have opened a support case for this issue (00741023).