Cool Blog: The Next Identity Manager - Libraries for Shared Policies and Resources

One of the new features in the next Identity Manager is the addition of Libraries to facilitate easier sharing of policies between drivers. A Library is really just a container where you can put a policies or other resources that are to be shared between multiple drivers. Prior to the next Identity Manager, policies have had to live within the context of a single driver. Policies could be shared between drivers, but they had to live within one driver - and often those who chose to share polices would create a dummy driver specifically for the purpose of having a place to store these policies. Libraries can exist under a DriverSet as well as under any of the standard eDirectory containers (Country, Locality, domain, Organization, Organizational Unit). 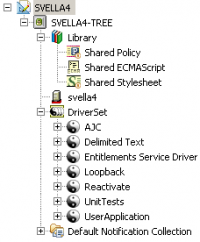 Along with Libraries, some changes have been made to the internal linkage of the policies that make up a Policy Set. It used to be that sharing policies that were part of a policy chain was problematic because each policy pointed to the next policy, and sharing a policy required also sharing all the the policies that followed it in the chain. The new policy linkage allows individual polices to be shared regardless of where they occur in the chain.

The next Identity Manager also introduces the concept of a Resource object. The idea behind a resource object is to have a generic object that can contain data of any sort. There are several new kinds of data that are now stored in resource objects, and they are designed to be extensible so you can store your own data in them as well.