0 Likes
"Theory is when you know something, but it doesn't work.
Practice is when something works, but you don't know why.
Programmers combine theory and practice: Nothing works and they don't know why"

What this article is about:
The following beginners' introduction into form script debugging tries to get you get started.

This article just focuses on debugging the ECMAScript that's used in your form and executed in the browser.

What this article is not about:
We are not talking about generic workflow debugging or driver debugging. That part of the logic is executed on the server.

You may add script commands to your code that display variable contents or warnings.

Using these commands is legitimate, but should primarily be used to present information to the end user of the final form version.

For development/testing purposes the debugging approach outlined below is more appropriate and even easier to use.

Catch Me If You Can

You know: Anything that can go wrong, is will most likely do so at some point in the future.

If some of your code logic can potentially fail - be it due to unexpected conditions, rights issues, or plain code logic faults - embed your code into a "try .. catch" clause,

If some exception is thrown, it will be displayed as alert message.

If, in the case of an exception you need to perform some sort of "clean up" after your code inside the try statement.

The code in the "finally" clause will be executed regardless of whether an error occurs in the preceeding try clause.

Do you need some special debugger?

For demonstration purposes, let us take a look at a very simple example:

Assume you have a User Application form with a user DNLookup control.

When a user is selected, the form script needs to check if the selected user is in a specific group, then present an alert.

To achieve this, you add an "onchange" event to the DNLookup field and add this code to the event:

Now, let us take a look at your code in the debugger.
To get you started, I'm guiding you through the steps for Internet Explorer and Firefox/Firebug separately.

Press the "Script" tab and click on "Start debugging" - if the debugger forces your User App to be reloaded; re-open the form that you want to debug. 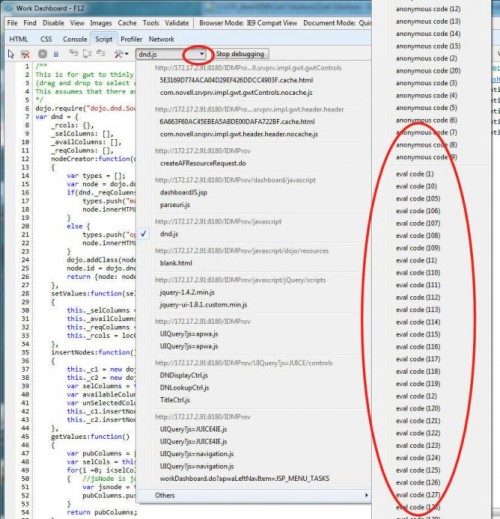 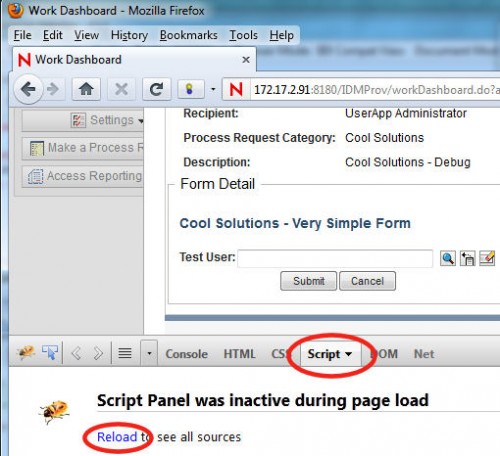 Press the "Script" tab and reload the page; re-open the form that you want to debug. 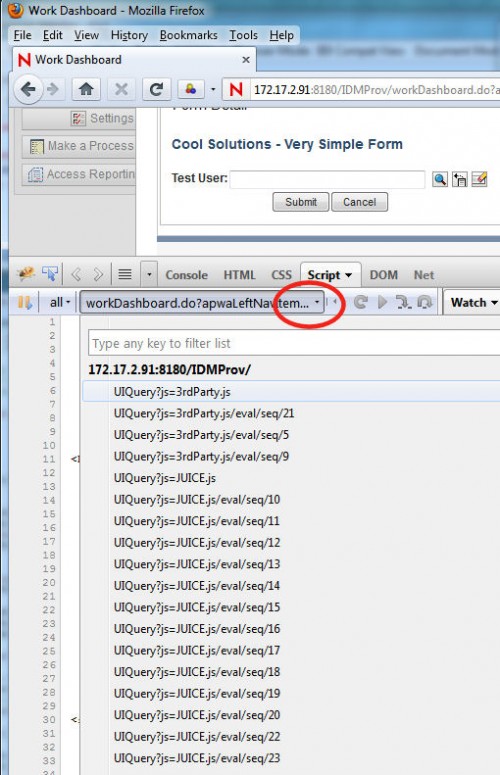 One of the pages and scripts that's on the list contains the inline script that you want to debug.

Finding your code is pretty easy, if you were including external form scripts.

In this case you'll find the script file listed in clear text and can quickly select the file.

However, if you're using inline scripts, one way to locate the correct item is to open one item after the other, then check the contents. Enjoy!

A better way to directly open an inline script is to add a breakpoint with a "debugger" statement.

If no debugger is loaded, the statement is ignored. However, if debugging is active, the execution is stopped and the debugger window pops up.

Now, it would be easiest to insert "debugger" statements at the critical places in your code. You could consider changing the sample above to:

However, IDM Designer checks if the script conforms to the ECMAScript rules, and since "debugger" is not an official statement, IDM Designer prevents you from saving the script.

The solution is to wrap it up and let the browser script engine decide if it can handle it:


The "eval()" statement asks the browser to evaluate whatever is passed as parameter.

Note: there are other breakpoints, like dynamic and conditional or data sensitive breakpoints.

We'll have a short look at these later.

Once you've hit a breakpoint, program execution is halted, and you can continue executing your script with one of several methods:

Step over
"F10" (IE & FF) Executes next code line as a whole, but doesn't jump into it, instead moves to the next line of the same scope

Step into
"F11" (IE & FF) If the next line is a function, it goes into the body that function, so you can debug it

Looking into our sample script with the 'eval( "debugger;" )' statement, the debugger pops up when selecting an object with the DNLookup control

The current code execution position is indicated by a yellow arrow.

Instead of using the function keys for stepping through the code, you may use the respective speed buttons.

If you have static breakpoints, Firebug allows you to temporarily disable them.

Proceed and step up to the calling function.

Now the script panel shows our inline script. If we move the mouse pointer over a variable, the variable contents are displayed.

In the "Watch" panel, we can manually enter variable names that we would like to keep an eye on.

The "Locals" panel shows all variables in the current scope, which is especially useful while your current execution point is within a function.

Same, same, but different ... in Firebug


You may right-click on dynamic breakpoints to add conditions, e.g., to make them data-sensitive. You may for example add conditions like 'i > 100' or 'dn.indexOf( "test" ) > 0'

In the debugger console windows, you can enter any script commands. This can come in handy when you want to quickly check or modify some variables. 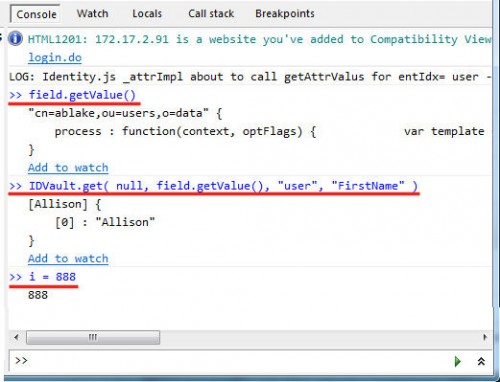 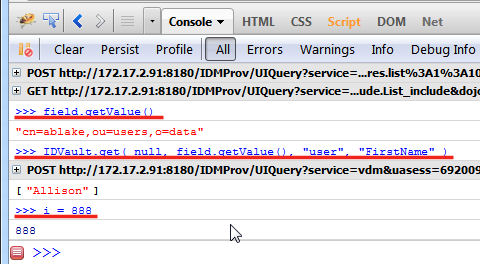 Especially when you've ended up adding more than trivial script code to your forms, you won't be able to avoid starting your debugger - and once you've made your first steps, you'll quickly ask yourself how you could get along without it.