by Ops_Guest in Information Management & Governance

Micro Focus has introduced many enhancements which is making Data Protector backup and recovery software easier to deploy and manage. One of these features is out-of-the-box support for HPE StoreOnce Cloud Bank.  Another enhancement is a one-step upgrade for customers currently on Data Protector 8.x, 9.x or 10.x.

In this article, we will review another key Data Protector capability, the support for NetApp and Dell EMC Isilon NDMP 3-Way backup to HPE StoreOnce Catalyst and to Data Protector File Libraries.  Watch this short video with a demo of this feature.  This 3-way support, also known as remote NDMP, removes the requirement to have an NDMP backup target attached directly to the NetApp / EMC Isilon filer. It also allows for the centralizing of StoreOnce Catalyst backup via common media server(s) with deduplication enabled for all workloads. Note: File Library support is also available for customers without a StoreOnce backup appliance.

Data Protector 3-way NDMP simplifies NDMP backup configuration and management by eliminating the need to attach, configure and manage backup targets on each filer. This occurs due to the backup data transfer being managed by the Data Protector NDMP media agent instead of the respective filer itself. This 3-way NDMP support for StoreOnce Catalyst also removes the requirement for StoreOnce VTL targets.

What is NDMP?
NDMP, or Network Data Management Protocol, is a protocol used to transport backup data between network attached storage (NAS) appliances and backup devices. NDMP uses a client server model where the backup software initiates the backup process while the NAS appliance performs the actual backup operations.

The NDMP protocol supports two data protection mechanisms: 2-way – and 3-way. In a 2-way NDMP configuration, the NAS filer is connected directly to a backup device such as a tape library and the backup software instructs the filer to perform a backup. The filer itself manages the data transfer directly to the backup medium. 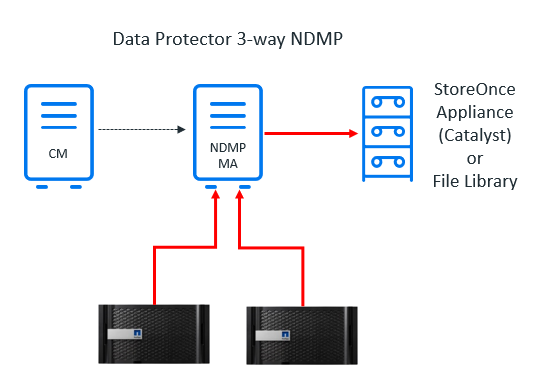 The configuration for 3-way NDMP backup to HPE StoreOnce is shown for NetApp filers.  The same can be leveraged for EMC Isilon.

Here are the steps to configure the Data Protector NetApp 3-way NDMP server integration with a StoreOnce Catalyst target: