(DP) Support Tip: Limits on the number of parallel running objects and gateways during a B2D session

As already mentioned, there are 3 settings in Data Protector allowing to control the number of data streams.

This is the most general limit of the three. Load balancing (more specific its MAX value) will limit the number of parallel running media agents (MA's)  and this overall for the whole session. No matter how many gateways may be specified, possibly on multiple devices, the number of running MA's will never exceed the load balancing MAX value during the session. 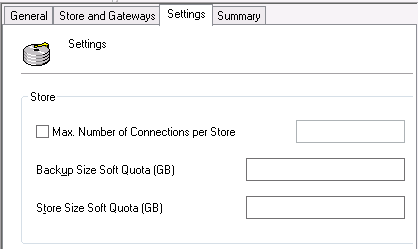 While load balancing is the overall limit per session, the "connections per store" is a limit .... guess what ... per store. It's, let's say, a fine tuning that controls or limits the number of parallel running MA's per store, that means: per Data Protector (DP) device.

In general, it's clear that each of these parameters may lead to a most limiting factor. When the load balancing MAX value is set to 1, there will be just 1 MA for the session, no matter how many objects or what other settings.  Or when a store only allows 1 connection, there will only be 1 MA running to that device, even when its "Parallel Streams per Gateway" settings allows more than that. Or the other way around, if the device has 2 gateways, each allowing 1 stream, only a maximum of 2 MA's will be seen for that device, even when the "connections per store" setting allows more. These parameters provide the administrator with different levels of control. If he only wants a general limit of MA's and DP can spread the load over the different devices and gateways then only load balancing needs to be set. Is more specific fine tuning required then the other 2 come in handy.

Note that the session manager (SM) will indeed try to spread the data streams (objects) over the different gateways (on either 1 or multiple devices) specified in the backup specification and this taking all limits discussed above into account.

As a last side remark, remember that StoreOnce devices have no concept of concurrency, as opposed to tape devices. This means that for each parallel running object, a parallel running MA will be seen., thus typically leading to more MA's (and possibly/usually multiple MA's per device). And that's exactly why the above settings have been provided: to control the number of MA's that get started per session, per device, per gateway.