For Backup To Disk (B2D) devices in Data Protector (DP), there are 3 possible gateway types (except for NDMP 3-way where source-side gateways are not available): source-side, server-side and target-side. Gateways are just DP clients with a media agent installed. The media agent has the client API libraries for the supported B2D targets on board.

Another way of classifying the gateways is by the way they are defined in DP: explicitely or implicitely. The source-side gateway is implicitely defined and is not bound to a specific DP client. This means it will be started automatically on the application host or in other words, the disk agent or BAR host. Obviously, a prerequisite is that this aplication host (which is not known at the time the device is created) has a media agent installed. So when using a source-side gateway in a backup definition, it is good practice to double check all DA hosts in the backup also have a media agent installed. When that is not the case, the backup will fail. In the device properties in the GUI, the source-side gateway can be seen as a check box to enable or disbale for the device, but there is no Gateway System defined.

The 2 other gateway types, server-side and target-side are explicitely defined. They are bound to a specific DP client and so it is known where the media agent will be running during the session. It will only be possible to define them when a media agent is already installed on the client system. When Server-side deduplication is set to "No", it is a target-side gateway. 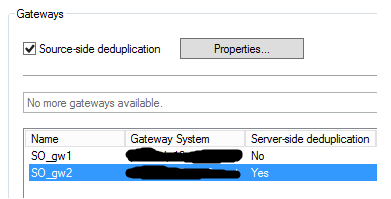 The following table summarizes everything.

More info on setting up devices can be found here: Devices