0 Likes
In my last blog post, I shared my intentions to start sharing some of my personal favorites from our list of new features of GroupWise 2014 R2, and this post will be the first in that series.

Today, the new GroupWise 2014 R2 (GW2014R2) feature that I want to share with you is Invite. Before we dive in, I just want to reiterate a disclaimer for any who didn’t see my previous post: Although the features I plan to share may not be the biggest ones that you will see in GW2014 R2, they are the ones I am enjoying the most in my daily work. I am also not picking a preference for specific features in the order I share them… I’m just picking features that I happen to be using and enjoying at this moment.

With that out of the way, Let’s dive in to the “Invite” function. The idea of inviting someone to an appointment isn't entirely new… After all, most of you probably have a method for inviting attendees to meetings already. The “Invite” function is simply an improvement and a simplification of the process you already use.

Imagine this scenario: You have received an appointment for a meeting, but when you look over the list of attendees you notice that a crucial member of your team is not listed. How do you currently manage such a situation? Typically, users will Delegate the appointment to the person that needs to be added, then check that little box to leave the appointment on their own calendar. That works, but it’s a bit of a non-intuitive workaround. To Delegate really means to send someone in your place, not to add a new attendee. With that in mind, we’ve made this process simpler in GW2014R2

Let me show you how it works. Lets assume 3 users with the following Roles:

Bruno: Works with George, needs to be invited to the meeting.

As Normal, Peter will schedule the meeting in his GroupWise client and send the meeting to the group. For the Meeting Organizer, nothing has changed so far. 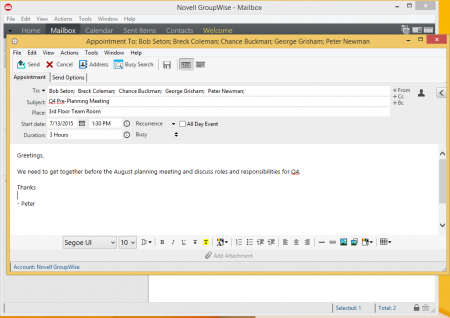 Now, let’s take a look at this meeting from George's perspective. When George opens the appointment, he notices that Bruno has not been included. To get this done, George can now use the “Invite” option on the appointment: 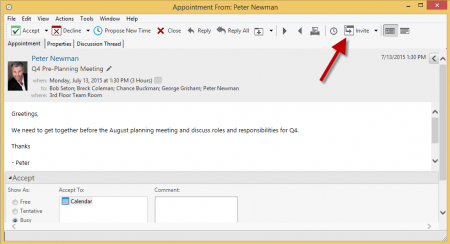 Once George clicks invite he is able to address the Appointment to Bruno and then add anything to the message body. George will NOT be able to edit the details of the meeting since he is not the Organizer. 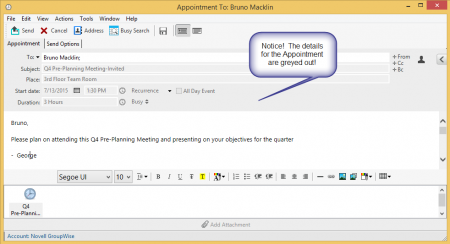 Once George is done inviting Bruno to the meeting he can send the appointment. When Bruno receives the appointment, he accepts it as he normally would, but there are a few giveaways that point to him being invited: a modified subject line, and George's comments appearing in the message body along with those of the original organizer (Peter). 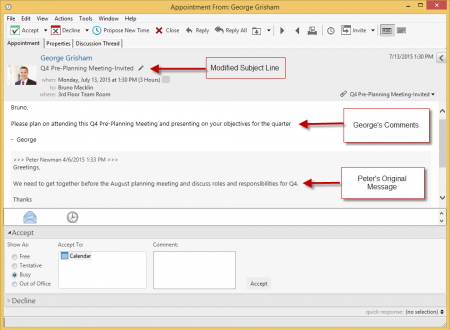 At this point, when Bruno accepts the appointment it will appear in his calendar as expected, but we’re not quite done yet. As the Organizer of the appointment, Peter is certainly entitled to know who will be in attendance. To facilitate this, an email message will be sent to Peter to indicate that George added an attendee to the meeting. 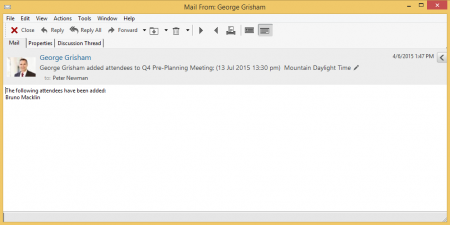 In addition to the email notification, George can look at the properties tab of that sent appointment to track the status and see who has accepted it… In there, he’ll even see invitees like Bruno.

Invite has some other options as well. For example, the organizer of the appointment can open it at any time after it was created and Invite new attendees at will. In fact, anyone can invite additional attendees to any appointment they’ve accepted in their calendar.

I utilize this new feature frequently. As a meeting organizer, I often create and send appointments only to later realize that I’ve left someone off. Instead of re-sending the appointment to everyone, I simply use the Invite function to add others to the appointment. I also frequently invite others to meetings that the original organizer did not think or did not know to invite.

I hope you are as anxious to use this new feature as I am pleased to share it with you. I will be spending the next couple weeks visiting with some of our fantastic customers, after that I will be sure to share another exciting feature with you.