"So far away, doesn't anybody stay in one place anymore" . . . that's been the story of my professional life as of late. As a consultant I spend many months in hotels, and many days in planes in order to help my customers implement a strong and stable GroupWise system. In fact, I am writing this article while sitting in first class on an international flight. If you have ever flown international first class you know the seats are designed as self-contained living spaces for each passenger. You can eat, sleep and work in one small space. Clustering GroupWise is similar in that each component (MTA, POA) lives, works and sleeps in its own cluster resource when properly planned. (GroupWise gateways are an exception as they stay with their parent MTA just like children.) This design strategy affords an organization the ability to provide a highly available GroupWise system. No one component is lost in the event of a failure of another component.

In order to make the POC a success I had to enlist the aid of a hardware vendor who could provide the fibre channel SAN we required as well as the number of nodes desired - 10. In the past I have had wonderful success with Xiotech SANs as well as excellent service from the many diligent employees at Xiotech. So naturally they were my first choice. Darin Fast was the 'man of the week' with his strong engineering background, and had the Xiotech Magnitude 3D built and ready for service along with the 10 servers. Next up, Morris Blackham, a GroupWise community elder, had the backing of Novell to spend a week in the deep freeze of Minneapolis in December helping me test, break and ultimately implement GroupWise 7 (with Beta service pack 1) on an OES Linux cluster. Finally, I took time away from my work to . . . well, do more work. The end result will be a White Paper documenting the entire proof of concept and the lessons learned.

In this article I will take a moment to give you my impressions of OES Linux clustering with GroupWise 7. This will be a different kind of article than I usually write, in that I am not going to 'teach' you anything, but rather provide some experiences (a story if you will). I will briefly discuss my thoughts, and likes/dislikes. Hopefully with this article you will be able to understand the requirements for OES Linux clusters.

As I started, the POC was no different from any other project: I did some planning and design following the known Best Practices for clustering GroupWise 7. First I set up all the naming standards for the cluster nodes, the cluster resources, volumes and the GroupWise 7 system. I always provide great detail in a design for my customers so that come implementation time, we can sail through without having to stop and think about details. We had 10 nodes all running OES Linux. Those 10 nodes serviced a GroupWise 7 system that consisted of 8 domains, 5 post offices, 2 GWIA gateways and 4 WebAccess gateways as well as the WebAccess application.

I chose a GroupWise design of this size because it will be a similar size that customers who cluster may have implemented. I wanted to make sure the POC was as true to life as possible.

Once we got all the OES Linux servers built, we installed Cluster Services, built the Linux cluster and installed GroupWise 7 in the design just mentioned. We chose to use OES SP1 to install along with GroupWise 7 with a Novell internal beta of SP1. We also chose to use NSS as our file system. This proved to be a task, as NSS tools did not seem to work as we had expected. Ultimately, we backed out NSS and chose EXT3 as our file system for the cluster resources. (OES sp2 will strengthen NSS on Linux.) EXT3 is more widely used and has a few more tools and abilities to recover if it becomes corrupted in some way. Very good reasons in my book to use EXT3. We were able to get GroupWise 7 up and running, fail over, fail back and all around working. So the POC was a success! 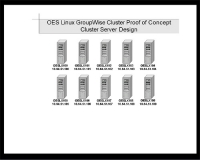 Let me go ahead and cut to the heart of the OES Linux clustering with GroupWise 7 and provide you with what I liked and what I did not like.

No Novell Remote Manager (NRM) support for clustering!! This may seem a small thing to dislike, but for me it's huge. I love NRM! It's fast, easy and I know it works with little effort. If you want to manage the OES Linux cluster you must use iManager. Now, iManager is good, but it requires me to do more clicking and, in effect, requires me to work harder to get the same result I can get from NRM. I am hoping Novell development will add in NRM in the future.

Too much typing!! Yes I know it's Linux and I know it's Novell's direction and I know it's a good operating system. But to me it seems like we have to go back in time to the old DOS command line days. I like my User Interfaces (UI). Now I will say that I enjoyed many of the things you can do at the command line. It does have a lot more flexibility and that is good. And you can create scripts to run the command lines you are too lazy to run.

Where did the MTA, POA and Gateway screens go? When you run GroupWise on Linux you do not get the wonderful full information Agent screens (pretty blue screens) that you get on NetWare. By default, they do not load so you never know - unless you run a command - that they are running. GroupWise development made the decision not to run the Agent screens by default. The good news is, there are agent screens and you can run them with a command, and, of course, you can script the command.

Now that I have given you a few of my dislikes here are the likes.

It's a server, no it's a workstation! Just like Windows, Linux has a GUI and you can do many things from the server just like working on a workstation. This is great! I can manage from the workstation and not have to run off to my desk.

What's an sd? Linux has an intuitive device naming standard which is 'sd(x) where (x) is a letter of the alphabet. Whereas NetWare provides device names that can be long and confusing, the sd(x) is simple, especially when you have multiple storage devices as you would in a SAN. The downside to this is that in the clustered environment you must set up the sd(x) for each device where a cluster resource will run on each cluster node. EVMS is used for this process.

EVMS (Enterprise Volume Management System). EVMS is the one tool on OES Linux that allows you to create and manage all disk partitioning, volume management, multi-disk management and file system operations. This is my favorite OES Linux clustering tool. It's similar to NSSMU in the NetWare NSS world but with more bang for your buck. By the way, NSSMU talks to EVMS in order to make the NSS Pools/Volumes.

GroupWise High Availability (HA). This little creation by the GroupWise development team will monitor the GroupWise agents and if it detects they are not running, will autoMagically reload them. This is very helpful since the agent screens do not run by default so you can be rest assured the agents will be running with GWHA. Of course like any other monitoring piece there is some configuration that must be set up with the GWHA.

While there were many things about OES Linux clustering that I did not like, I found equally as many that I did like. Just as you, I have had to learn an entirely new, and sometimes cryptic OS. Frankly I am still learning as Linux has so many possibilities.

GroupWise is pretty much the same on Linux as on NetWare. It runs, it performs well, its failover/failback works. The one disadvantage of going to OES Linux cluster is the learning curve. Where you are a NetWare person or a GroupWise person you will have a huge learning curve in order to support GroupWise 7 on an OES Linux cluster. My suggestion is to get started learning now. [Editor's Note: Check out this free NetWare to Linux training.]

Novell offers several classes, online training and a lot of documentation on OES Linux. You may also consider setting up a small lab on a single server or workstation. Or use VMWare. Once you have some basic Linux knowledge and some fun learning it, you will see why its so like and especially why it's Novell's direction.


I wrote this article to provide a small taste of GroupWise 7 on an OES Linux cluster. My intention was to let you know that it has been proven. It will work and it will support a large GroupWise system. It's now up to you and your organization to start testing and implementing. Hopefully, you will not find yourself "so far away" from building GroupWise 7 on a Linux cluster. 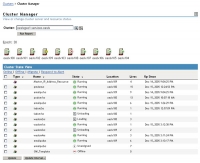