Recently, I've received a few questions about whether or not ZENworks Patch Management supports this new update process. The answer is a resounding "Yes", and we have since it was introduced with the release of Windows 10 version 1809. So, with that question answered, I thought I'd take a minute to share answers to a few related questions you might have.

What is the actual impact on the update package size? 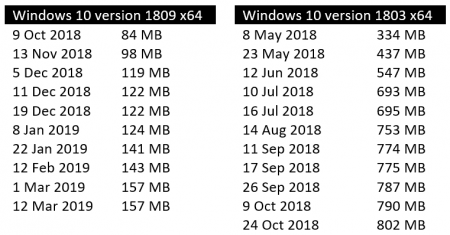 As you can see, the initial 1809 update was approximately 4 times (398%) smaller than the initial 1803 update, and after six months it was 5 times (510%) smaller. Certainly a significant reduction when it comes to hard disk storage and bandwidth requirements.

How does the new update process work?

The new process implements a "back-then-forward" model where each update reverts the operating system to the version's baseline (in this case the 1809 RTM) and then applies the changes required to move the operating system forward to the current update level. Even with reverting to the baseline, this update process has proven to be faster so far than the previous method.

Does Microsoft plan to back-port this update process to earlier Windows 10 versions?

No. They have indicated that the extensive modifications that are required for the update package and the update service make it too risky to support on previous versions.

Is this process used for any other Microsoft operating systems?