MigrationDeletedUser
0 Likes
Problem:
Some of our machine images didn't have the proper power scheme configured before they were rolled out. In some cases it's easier to re-image the machine, but in other cases like this one, it was better to find a solution where we could push power settings out to all our workstations to confirm they are setup properly.

Solution:
I searched the web high and low to find a power scheme solution that we could distribute to multiple users easily. The problem is that each user has their own dynamic registry entry for their power settings. This would be a difficult task at best to figure out each user string on each computer. You can't use powercfg.exe to accomplish this directly since it only works on a per user basis, and limited users cannot change their power settings. When you run powercfg.exe with Administrative privileges, it only changes the power scheme for the Administrator.

I finally found a website that did almost exactly what I needed. I'd like to thank Jon Giffard for this entry in his blog that gave me the solution:

“Just to be clear, MSFT decided that power management should be stored for each individual user and then didn’t allow them to change it. Square that circle.”

So, it was ZCM to the rescue!

The Fix:
You can utilize a Microsoft tool, SubInACL, to change the registry rights on the power schemes. I put the following ZCM bundle together with the help from Jon's blog.

Create a new ZCM MSI Bundle with the following:

Script02 Contents: (While creating the script in ZCM, be sure to go to “More Options,” and run as a User!

@echo on
%SYSTEMROOT%\system32\powercfg.exe /setactive "Always On" 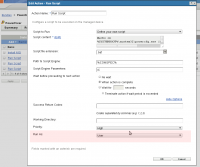 Conclusion:
Test this on a test PC before you roll out to the rest of your production workstations to avoid any serious blunders. Then you can login as a limited user and ensure your power scheme is configured properly. After testing, you can then roll this out to the production dynamic “Windows XP Workstations” device group.