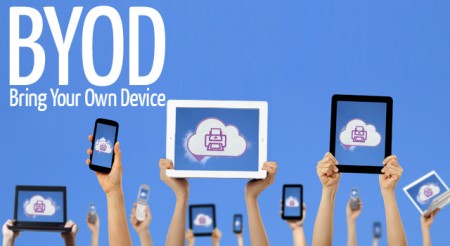 We know you’re sick of hearing the term BYOD. Everyone in IT is. But that doesn’t mean everyone in IT has solved all the problems associated with employees bringing their devices to work. We’ve solved some, sure. But many still linger. Let’s travel back to 2011, when the BYOD hype was just building up, and see how far we’ve come.

That’s what multiple articles, like this one, said in 2011, and they were right. At the time, mobile device management was just coming on the scene.

Status: According to Gartner, two thirds of companies will have a MDM solution in place by 2017. The best modern mobile device management solutions provide easy, user-based management that keeps IT from becoming overburdened. Sadly, many current MDM solutions lack important features or make you manage each device individually. That means many organizations have inadequate solutions, and a third won’t have any solution at all—even by 2017.

In 2011, this article and others predicted that schools would finally start embracing mobility. Some industry experts said schools would even start promoting mobility through 1:1 computing programs.

Status: Not exactly. While the IDC says “The impetus to go digital in the education sector can be found among virtually all U.S. education institutions as well as around the world,” schools are still struggling with the details. First there’s the heterogeneity challenge: with more and more devices on the market, schools stuck with single-platform mobile solutions are struggling. Plus, schools continue to be underfunded: few have the ability to ramp-up an IT staff to deal with privacy, security and management issues. The list of problems is long. This one is far from solved.

We already have BYOD policies in place!

According to ZDNet in 2011, 75 percent of organizations already had BYOD policies in place.

Status: Maybe someone working on that article—or the report it was based on—crunched the numbers wrong. Estimates these days say 60 percent of companies do not have policies in place. More importantly, experts say many policies are poorly designed. But maybe the difference in what we believe constitutes a good BYOD policy explains those numbers. Many of the respondents to that 2011 survey said their policy involved allowing “any device.” Today’s numbers seem to indicate that we have a higher standard for what makes a BYOD policy.

Cisco said in 2011 that providing a predictable user experience to applications and services was going to be a major challenge.

Status: The prognosticators were not wrong. In fact, it may be even worse than they thought. According to a Techradar article on bring-your-own-apps, 70 percent of employees using their own devices are sourcing their own apps. IT is rarely involved in the selection process. This makes tracking organizational data and maintaining security nearly impossible. Corporate app stores are seen as one solution, but Centrix Software recently showed that app stores are just increasing software waste. That means we’re not even close to solving this issue.

IT control and security are going to be issues!

In the same study quoted above, Cisco worried about IT control and visibility. At the same time, the Aberdeen Group said “IT departments need to make sure their management tools can do things like enforce strong passwords and wipe data from lost devices.”

Status: Today, most MDM solutions can do what Aberdeen Group requested, but that doesn’t mean IT control and security aren’t still issues. Malware prevention, physical theft and policy enforcement still give IT departments headaches. Not to mention, there are legal concerns nobody had even thought of in 2011, like overtime pay for constantly-connected employees. IT control and security are always likely to be issues.

It’s 2014, but to judge from the way some vendors and organizations handle mobile devices, it might as well still be 2011. As long as organizations continue to fall short in their BYOD responsibilities, you better believe you’ll keep hearing about the issue. In fact, if you want to stop hearing that term (and who doesn’t), the best way may be to solve the basic mobile challenges of yesterday and today in your organization. Then, BYOD can become business as usual.