The String Replace Map activity takes an input string, and replaces all occurrences of characters/strings based on a map table.

In Europe we are normally more concerned with preserving non English Language characters in pieces of text than removing them, so when i got asked about this it was an interesting reversal of a problem I am familiar with.  Many systems do not support non-English characters so providing a method in a workflow as part of a bigger solution to replace characters with a more suitable alternative for a target system can be of great benefit.

To make this a little more clear, for example we might want to replace all these characters in the first column with those in the second...

There is a string operations activity which does text replacements, but it only replaces one string per activity - so for example you would have to have a series of those together in order to replace the list above and it could be a very long list.  First replace À with A, next activity replace Á with A etc.  This type of thing is a pet hate of mine in a workflow, a workflow can get bloated very easily by repeating simple operations like these, I normally like to replace the operation with a script or an activity which can do it more efficiently and tidily.

Originally planned just to replace characters, replacing strings was chosen for more flexibility, for example to replace Æ with AE

So the activity takes 2 inputs, the string to manipulate and a table containing the map values.  This table is a standard Aegis table, with original values in column 1 and new values in column 2.  The activity ignores column names so they are not important in this scenario. 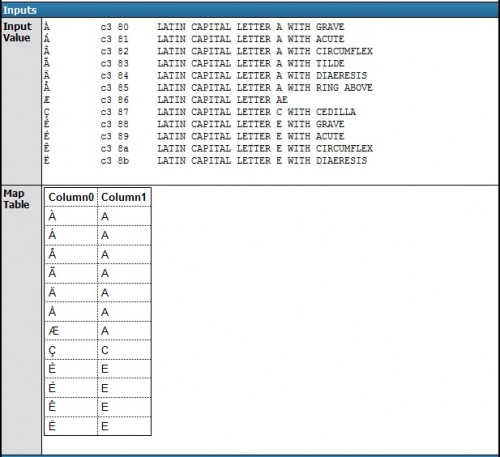 And the output is the updated text...

This is a very big improvement over using multiple activities, but it is specialized to the task at hand.  But how to generate the map table in the first place?  Manually building a table can be really tedious - try it and see - fine for a few rows and columns, but even my example only went to letter E of the alphabet.

A common ways of creating the table is to have a CSV file with the map in it - read the file direct into an Aegis table.  Another method is to run a query against a database which has the mappings defined.  Having the map data available outside of a workflow means that you can add extra mappings without altering the workflow - it just reads in new mappings dynamically.

There is of course a bit of a gotcha in this.  The replace is done on a row by row basis starting on the first line of the table.  If you say replace color with colour  on table row 1 and then our to your on table row 2, color will change to colour and then to colyour.   So replacing special characters will be easy but replacing strings will be a challenge requiring a bit of planning of ordering the values in the table!

Some content on Community Tips & Information pages is not officially supported by Micro Focus. Please refer to our Terms of Use for more detail.
Top Contributors
View All ≫
Version history
Revision #:
10 of 10
Last update:
‎2020-01-09 16:44
Updated by:
martincotter