Why do I get the error "GUI-Level Testing Replay:11 SilkTest reported. Project failed to open"?

Why do I get the error "GUI-Level Testing Replay:11 SilkTest reported. Project failed to open"?

It is essential that when exporting the SilkTest project only the options "Compile before exporting" and "Include extend.ini file" are checked as shown below (The export to single SilkTest package should also remain checked): 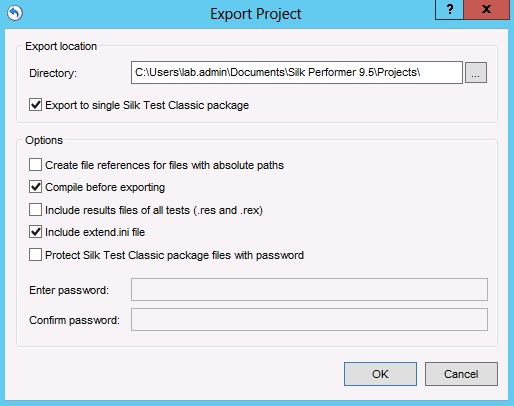 Failure to do so will result in the SilkPerformer GUI-Level test displaying an error:

Trying to open the same exported SilkTest project on the SilkPerformer machine should show the reason for the error, e.g.: Unable to open SilTest\ProjectName.res

This specific error often occurs when users export a SilkTest project from machine A to machine B and do not uncheck the "Create file references for files with absolute paths" in the setting described above.

When SilkTest tries to find files with absolute paths to machine A (such as results files) on machine B, they are not present and it displays an error "Unable to find SilkTest_demo.res, removing from project list".

It is possible to overcome this issue simply by exporting the project again correctly as shown in the screenshot above.

This can be done on either the original SilkTest machine or the one displaying the error.

Some content on Community Tips & Information pages is not officially supported by Micro Focus. Please refer to our Terms of Use for more detail.
Top Contributors
View All ≫
Version history
Revision #:
1 of 1
Last update:
‎2013-02-15 18:37
Updated by:
Matthew McCready