In the migration from Windows XP to Windows 7, there was a lot of discussion internally regarding the use of the new start-menu in Windows 7, which several found cumbersome, some who were asking for the classic style. There is no "official" way to set the start-menu to classic, other than to install a custom shell which is what this article will be about, and add ZCM shortcuts do it. I've tested this with ZCM 11 SP0 and ZCM 11 SP2 Beta 1 (Should be the same for ZCM 11 SP1, unknown for ZCM 10.3.x)

Here is what the aim of this article is about: 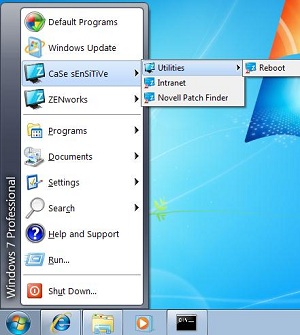 Is this something for you?

Experiment, install it locally on any device with Windows 7 and try it out. The trick we're using is explained shortly. If your organization wants to use it, fine. A lot of the users that approached the project I was in, we couldn't help in the start, so they actually familiarized themselves with the new start-menu. When I found the solution later on, most of my coworkers actually preferred the Win7 approach than the classic, so whatever floats your boat. In case you are stuck with the decision, this article is for you, so you and your organization can take a qualified decision.

Download the Classic Windows Shell from the URL at the end of this article and install it locally, for this article you only need to install the Classic Start-Menu, but you are welcome to try out the Classic Explorer and ClassicIE9 shells too.

To get you started, open "cmd" and point it to the ClassicShellSetup_x_y_z.exe (3_2_0 currently) with /? At the end, this will give you valid launch parameters for the .exe. You will need this later if you want a pure MSI install, rather than an .exe file that is copied, unpacked then launched. Go right ahead and double-click the .exe to launch the setup, install at least Classic Start Menu to get started.

You should after the installation, have a similar start-menu to this:

Now we're ready to start experimenting. (To get the Win7 standard on the fly, just hold shift while clicking the flag/start, it will give you the normal start-menu)

First off, the following "hack" was similar to what I'd previously seen as the "godmode" hack in the later days of Vista and early days of Windows 7, we're going to use the same method here to create the paths we want because ZCM itself is unaware of the classic start-menu as of writing.

Make sure you have deployed some bundles on the start menu already via the ZCM agent.

Open up CMD again, and change directory to "%APPDATA%\Microsoft\Windows\Start Menu\Programs"

Then type "dir" and hit enter to list the contents. You will see that the ZCM folders have a GUID behind them, in fact the same GUID on all, as in the example below: 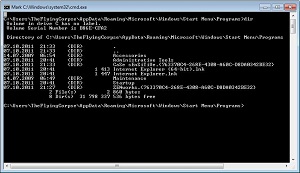 Please also observe that it's a folder to Windows as well, the GUID is what gives it special properties. (Google "Win7 GodMode" if you don't believe me!)

To make your own folder, copy the GUID with brackets, move up one level so you start at the root of the start-menu. Ideally the GUID is the same as in the example pasted below for your convenience:

To create new folders pointing inside the ZCM structure, "all" you have to-do is create the folders in this directory with a dot then the hash, "<folder name>.{763370C4-268E-4308-A60C-D8DA0342BE32}". Please note they are cAsE SeNsItIVe, if you are off by one, the folder will point to the root of the Application Explorer structure rather than the folder you wanted to place there.

Create a new folder via Explorer in %APPDATA%\Microsoft\Windows\Start Menu" as the command line doesn't work 100% of the time if you have folders with spaces in their names.

This is what I'm talking about! Go ahead and look inside it, you will see (if you got the spelling and case correct) that the folders are there. You can do this to any folder that has a defined ZENworks Explorer path. No more going Start -> All Programs -> <ZCM folder name>, its right up there.

Download the Classic Windows Shell from the URL at the bottom of this article (read everything before you go ahead and do that to get the full idea!) and follow these guidelines to create a MSI Application bundle for the Classic Start Menu:

Unpack the MSI for your architecture by either executing the .exe with extract32 or extract64 parameters, execute the .exe with /? for more details.

Assign to device or user, and test the installation.

You might need to relog or restart to see the change; I haven't been able to figure out how to refresh the desktop as the .exe installer does.

Creating folders for users to use via ZCM

To create folders that fit into the classic start menu automatically, you "simply" have to create a folder in the local users "%APPDATA%\Microsoft\Windows\Start Menu" folder with a "Create/Delete Directory action" in any bundle, with the ".{GUID}" at the back.

This is an experimental workaround that I've been using personally for the last 4 months without any issue at all; the shell appears stable and functional. The only thing I miss from the fancy start-menu is the do whatever search field, though it's always within reach by holding down Shift while clicking the flag/start.

If this article helps you whether or not to continue debating the Classic Start Menu look, it has served its purpose, as it probably has cost a lot of time around the world to see if its possible (so it's easier to decide if it's time to move on or not).

PS: I wish there could be a way to put the ZCM folders directly to the quicktask bar, I only use the start-menu to access ZCM shortcuts not present on the desktop…

Link to Classic Shell as of this article it's version 3.2.0:

perfect idea! Everything ist working fine, but I have one problem:

The bundles appears as shown above in the Startmenu. So I can see the bundles in a ZenWorks folder and when I move the mouse to, the menu opens and I see bundles. Now the problem: I can't left-click to open. Nothing happens. If I right-click the bundle I see the context menu. It's a grey box without letters, but entries there are, so I can click the first, second, third entry (and so on). Then the bundle starts (at first entry).

Is there anyone with the same problem???

Thanks a lot for answers!
Christian

Anonymous_User
NAL icons in folders aren't indexed by Windows so the start menu search doesn't find them.
(NAL icons not in folder do work)

BUT, by using "Classic Shell", all your NAL icons are indexed and searchable.
Also, it works on Windows 8 too! And you can make Windows 8 start menu and desktop work as Windows 7 in most ways.